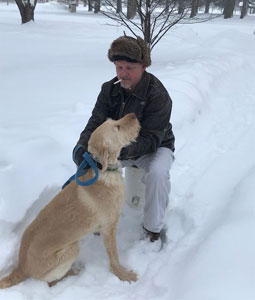 Nels Isaacson of rural Spring Valley recently made an amazing find.  He says he spent a lot of time doing his research, and did a lot of walking around, but in the end, dumb luck played a crucial role as well.

“I’ve always been a student of history, and especially the 19th century American outlaws.  Most people in Minnesota have heard that the Jesse James gang once tried to rob a bank in Northfield.  Their gang was mostly made up of the James and Younger brothers, but a few other friends and relatives rode with them once in a while.  That Northfield trip actually was the end of the gang, because the robbery was foiled, and most of them were killed or captured,” Nes shared.  The attempted robbery occurred in 1876, and essentially ended the era of western gunslinging marauders in the Old West.

Nels says he’s spent years researching the James gang and their exploits.  “One thing kinda caught my attention.  In one of the gang member’s diaries, it told about their trip to Minnesota, as they made their way up to Northfield.  Clell Miller was a sometimes member of the gang, and in his diary, it mentions that they spent a few days at a farm owned by Sidd Finch, and that they camped out near a grove of cherry trees, and spent one day looking around in a cave.”

“Suddenly, it all clicked,” exclaimed Nels, “I realized they could have been near Cherry Grove and Mystery Cave.  I got pretty jazzed up, and then when I did some research and found out a guy named Sidd Finch had actually owned a farm there around that time, I was sure I was onto something.”

He went on to say that Miller’s diary mentioned something in a “Corydon bag” that was burned near three walnut trees, just north of the cave.  “But when I looked closer at the handwriting, I realized it might have said ‘buried’ instead of ‘burned,’ so I got wondering if they stashed something they intended to return for.  And the James gang had once robbed a bank in Corydon, Iowa, so that could be where the bag was from.  But of course they never got to come back after Northfield, so whatever they buried might still be there.  Obviously, the three walnut trees would be long dead, so it would take a lot of luck, or a lot of time, to find anything.”   Fortunately, Isaacson had both time and luck on his side.

“I’ve always enjoyed Mystery Cave Park, and ever since I figured out that the James gang probably came through the area, I’ve been spending more time wandering around, hoping to find something.  Sometimes I bring my metal detector, and I always bring my dog, Otis Campbell, in case I run into any wild critters.  He’s not a bright animal, but he’s loyal.  Anyways, I’ve found a lot of interesting oddball items, like cans and spoons and such.  But never anything valuable or important.”

“So anyways,” Nels continued, “I was there shortly after the holidays, and Otis needed to do his business, so I sat down for a smoke.  Now, my doctor has been harping at me for 30 years to give up cigarettes, but I guess the joke’s on him, because as I sat there smoking, I noticed an odd-looking lump sticking out of the side of a stream bank where a tree had fallen over. “

“I pulled on it, and it fell to the ground.  It was three small, heavy chunks of corroded metal or something.  I brought them home and power-washed them, and found out they are small gold bars.  I think it’s gold that the James gang had gotten from some previous robbery, and stashed here before they did the Northfield job.”

According to Isaacson, the total weight of his find is roughly 16 pounds, which at current gold prices (roughly $1,300 an ounce) equates to a value of around $331,000.  He wonders if more gold is still undiscovered in the area, and said, “Once the frost is out of the ground, I’ll be back up there with my metal detector and a spade.  And Otis, of course!”  When asked how he plans to spend his windfall, Nels replied, “I’ve always wanted to take a trip, so I’m looking to spend a weekend at Wabasha.  And I’m thinking of buying a cordless phone.”

Isaacson realizes others may also head to the park to search, and he welcomes them but suggested, with a wink, “Anybody looking for gold there needs to keep three things in mind… Number One: Obey all park rules.  B: Keep safety in mind; there are a lots of thorny bushes and stuff, and snakes in the summer.  And on the third hand, it’s worthwhile to give careful consideration to the date of this publication.”