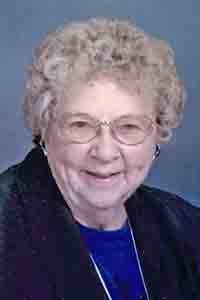 Irene Harriet Christianson Rice was born to Haakon and Julia (Flatten) Christianson on December 4, 1922, the youngest of six children.  She entered eternal life on May 2, 2021, at Gundersen Harmony Care Center, at the age of 98.

Irene attended elementary school at Elliota and graduated from Canton High School in 1939 as salutatorian of her class. She met her future husband, Cyril Rice, when very young as he was the boy next door.  He was a bit older, but was best friends with Irene’s brother, beginning a lifelong friendship between the two couples.  On January 15, 1941, she married Cyril at Decorah, Iowa.  They had two daughters, Harriet and Dorothy.

Irene was a hardworking farm wife and was secretary at the Canton School for 23 years.  She was active in the Canton American Legion Auxiliary for many years, and was a member of the Canton Presbyterian Church for 80 years, where she served in many offices.  She was Clerk of Session for over 14 years, an elder and deacon of the church.  She was a member and officer of the Presbyterian Women.  She also was the treasurer for the Elliota Cemetery Association for many years.  Irene was a charter member of the Canton Historical Society.

She enjoyed traveling with her husband and later with her daughters.  She visited all 50 states except Georgia and South Carolina, plus Norway and Canada.  Her hobbies included square dancing, traveling, crocheting, playing cards, and reading. She lived a very full life filled with much joy and laughter.

Her beloved husband passed away on March 18, 1994.  She was also predeceased by her parents and all her siblings: Evelyn (Ed) Kiehne, Odella (Howard) Johnson, Myrtle (Francis) Steen, Ruby Christianson, and Henry (Marilyn) Christianson; several nieces and nephews, and her son-in-law Bob Coons.

She will be dearly missed by her daughters Harriet (Henry) Lawston of Lanesboro, Minn., and Dorothy Coons of Canton, Minn.; her grandchildren Russell (Pam) Wilbur, Melissa (Paul) Steen, Lynn (Alan Schultz) Wilbur, Gene (Lisa) Lawston, and Kent Lawston; step-grandchildren Bobbie Coons and Travis (Heather) Coons, great-grandchildren Adam and Timothy Wilbur, Maya and Bennett Steen, Greta Wilbur, Isaac Schultz, Blake, Lauren, and Jack Lawston; Austin, Joseph, and William Boettcher; and Avalynn and Avarey Coons, and many nieces and nephews.  Irene was so proud of her grandchildren and great-grandchildren, and all of their accomplishments.

Private family services will be held at the Canton-Scotland Presbyterian Church in Canton on Friday, May 7 at 2 p.m., with a public visitation prior to the service from 12:30–1:45 at the church in Canton. Burial will be in the Elliota Cemetery. The family requests memorials to the Canton Historical Society or the Elliota Cemetery. The Mengis Funeral Home in Mabel is assisting with arrangements.