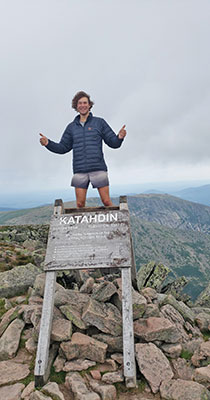 Ian Meisner completed the first hike in his quest to conquer the Triple Crown of Hiking. Long distant hikers must complete the Appalachian Trail, Pacific Crest Trail, and the Continental Divide to earn the title Triple Crowner, recognized by the American Long Distance Hiking Association (ALDHA-West). The three trails total approximately 7,500 miles and cross 22 states. The elevation gain of the three trails is greater than climbing Mt. Everest 41 times.

As of September 2019, 440 people have been recognized as Triple Crown recipients.

Meisner completed the 2,193.1-mile Appalachian Trail (AT) in 4½ months, starting his journey on March 12 and completing it on July 25. According to the Appalachian Trail Conservancy, “A typical thru-hiker takes 5 to 7 months to hike the entire AT.”

“The Appalachian Trail is the longest hiking-only footpath in the world.” –www.appalachiantrail.org

According to the ALDHA-West website, approximately 3,000 – 4,000 people attempt the Appalachian Trail each spring, with only 10% completing the thru-hike. Meisner was the 161 northbound hiker to reach Mount Katahdin this year.

Twenty-one-year-old Meisner graduated from the University of Minnesota Duluth in 2020 and spent one year working at Stier Steel in Spring Valley, saving money before heading out on the trail. So, what motivated Meisner to attempt the AT? “It is hard, scary, and I wanted to challenge myself.”

What training is necessary to prepare for a walk of this magnitude? Meisner shared that he did not do anything to prepare for AT, “I just kept doing what I normally do.”

Meisner is a long distant runner and was an athlete during his years at Kingsland High School, Spring Valley.  He shared that he is comfortable outdoors, which he attributes to growing up on a farm in Southeast Minnesota, which is a bonus when exploring the outdoors and weathering the climate, making Meisner a natural for tackling the Appalachian Trail.

The AT is a very social trail. Meisner’s trail family of five plus himself met on the trail and, according to tradition, go by their given trail name, which they can accept or not. Meisner’s trail family consists of Shady Grove, who will complete the Triple Crown next year; Disco is a college student and took a gap year due to COVID; 28-year-old Seeker from Denver just finished his Triple Crowner with the AT; Huckleberry took a gap year; 26- or 27-year-old Stew is a life-long traveler; and Meisner’s given name, Gunga Din.

Meisner’s trail name was given to him by an older gentleman he shared his water with. The man thanked Meisner and quoted a line out of Rudyard Kipling’s famous poem “Gunga Din.” “You’re a better man than I am, Gunga Din.”

Meisner’s enthusiasm was contagious as he explained the best part was that his trail family did not wait for anyone, “If you weren’t there we would leave you.”

In the beginning, Meisner used a tent three times and then sent it back home. After that, he would make it to a shelter on a rainy night, a three-sided structure with a roof. He would sleep under the stars on clear nights in a 50-degree sleeping bag. Then, once a week, Meisner would spend the night in town so he could take a shower. Hikers refer to it as a Zero, Nero, or Hero.

Meisner explained, “A Zero is when hikers do zero miles, relax and recover, spend the night in town, and eat a lot of food. A Nero is a near zero-day where the hiker stays close to town, hiking less than 5 miles into town, spends all day in town, and sleeps in town. It is basically a Zero, but where you spend less money. Finally, Hero is when the hiker spends all day in town doing their chores and is back on the trail that night.”

Meisner shared, “I saw three black bears,” explaining that only black bears are on the AT. Meisner mentions that the rarest animal he saw was the fisher cat, a carnivorous mammal near the streams. There are moose in Maine, New Hampshire, and Vermont, but Meisner did not see any; though, he did hear one. Mice are a bigger problem than bears.

Where blisters a problem? “I do not have a problem with my feet because they are so calloused and hard from running that I did not get any blisters on the whole trail. My feet were in great shape even though they hurt.” Meisner explained that it is normal for your feet to hurt because of all the miles spent running, but you don’t feel a thing thanks to endorphins.

“You are hurting all the time,” shared Meisner. “There is a phenomenon known as trail legs that you get after about 300-400 miles of straight hiking; at that point, you quit feeling sore in your legs, and then you can go as far as humanly possible. I love it. It is crazy.”

Challenges are a big deal on the trail, and fun. One such challenge is the four-states challenge, where you go through four states in one day. So in 24-hours, you have to make it 44 miles going through Virginia, West Virginia, Maryland, and Pennsylvania.  It was not hard enough for Meisner’s group, so they decided to see how far they could go in 24 hours. With a 30-pound pack on his back, Meisner ended up doing 70 miles in 24 hours.

“You can eat anything that you want to carry.” Meisner ate Ramen noodles and instant mashed potatoes. Hikers eat whatever is cheap and light and unhealthy and high in calories. Favorite foods are tortillas, wraps, tuna packets, cheese, potato chips, candy, and chocolate. Meisner explained that, “Once we got to town, we went to the grocery store and got hummus, guacamole, chips, and salsa and would eat a ton of veggies. You can’t eat enough calories to catch up.” Meisner lost 60 pounds, noting that, “You really get to know your body.”

The communities were excellent and everyone on the trail was super friendly helping you out. “Judy and husband Frank in Lincoln, N. H., went out of their way. The group was getting set up for a difficult trek with the White Mountains and the couple invited the group to stay at their home. The wife feed them dinner, made them breakfast, and drove them out to the trail.” The group stayed with them twice.

Another cool thing is trail magic that illustrates the hospitality one finds on the trail. People just living their life wanting to help hikers will set coolers of pop or beer along with snacks at the road for hikers to find.  There are also people grilling alongside the road and hikers join them to converse and eat. Generally they are thru-hikers that want to give back. Meisner plans on going back next year and giving back some trail magic.

Meisner’s advice to others thinking about long-distance hiking, “Just do it. Don’t give yourself an out.”