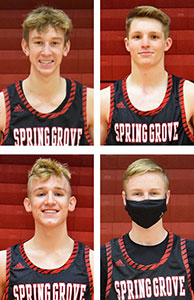 Caden Grinde, for the second straight season, was voted Most Valuable Player by his 2021 Spring Grove basketball teammates. And the for the third consecutive year, he also received the Hustle Award, determined by his season total of hustle points. Tristan Hammel was voted the Lion Award while the Most Improved Player recognition was shared by Jaxon Strinmoen and Tysen Grinde. Spring Grove went 13-4 while securing a 10th SEC East Division championship in 11 years.

Caden Grinde (MVP, Hustle) a 6-foot-4 senior guard was also the Conference Player of the Year while named to the All-SEC Team for a third season. He was also a First Team selection on the All-Journal Team by the Fillmore County Journal. Grinde led the Southeast Conference in steals and was second in the SEC in scoring. The team captain led the Lions in seven key categories: scoring (19.2 points per game), steals (4.7 spg), assists (4.2 apg), made free throws, made 3-point field goals, hustle points and overall efficiency rating. He was Spring Grove’s second leading rebounder (5.0 rpg).

During a pandemic season, the Lions played an abbreviated 15-game schedule, but Grinde graduates while ranking fifth in career steals (261), seventh in career blocked shots (52) and 11th in career points (1,150), 12th in 3-point baskets (105), 13th in hustle points (238) and 14th in made free throws (155). He signed to play college basketball at Upper Iowa University.

Hammel (Lion Award) a 5-11 senior forward, was honored for his passion and attitude on and off the court. In his first and only season of high school basketball, Hammel did not see much varsity playing time but proved to be a valuable part of the team.

Strinmoen (co-MIP) became the sixth man when only six Lions saw action in competitive contests. The 6-1 freshman was valuable at the foul line where he hit 11 of 13 free throws, a team-high 85%. He also shot a team-best 62% from the field (16 for 26). Strinmoen launched only three shots beyond the 3-point arc, but he nailed two of them.

Tysen Grinde (co-MIP) earned a starting role as a 6-2 sophomore guard, who shot 69% from the free throw line while averaging 8.8 points per game.

Five of the seven letter winners were also Academic All-Conference, recognizing letter winners with a 3.4 or higher GPA during the academic quarter of the basketball season. These scholar athletes were Strinmoen, Tysen Grinde, Elijah Solum, Carson Gerard and Caleb Griffin.