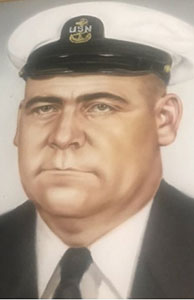 Eugene Francis Simon was relieved of his earthly post on February 12, 2021.  Born on May 20, 1928, to Hugh and Ellen (Rafoth) Simon and known by “Bull” to his family and friends, he was raised with nine siblings in a loving and spirited family.  He was a teen when his elder brother Anton, was killed in action in WWII, which heavily impacted his life.  He joined the Navy in 1948 as an electronics specialist and served his country until 1968, visiting Vietnam, Greece, Turkey, and many countries in South America.  The words of the U.S. Navy song were words he lived by:   Faith, Courage, Service True, with Honor Over All.  During his time in the Navy, he served President Truman on his many visits to Key West, Fla., traveled through South America with President Eisenhower, and provided support to President Johnson.  Gene took great pride to have directly served three sitting U.S. Presidents.

In 1968, he retired from the Navy after 20 years of service and attended Winona State University, where he obtained a degree in business.  He worked for a jukebox company, traveling the east coast and Midwest.  After a few years, he returned to the Ostrander area.  During his early years in the Navy, he began investing in land, and now developed real estate in Ostrander, naming one street after his mother Ellen.  He renewed his acquaintance with high school friend Betty Nelson Aide, and in 1978 they married and settled on his farm.  His service to his country was a great source of pride, and he remained active in the American Legion, serving as Commander of the Spring Valley unit.

Gene was known for his quick-witted sense of humor, which would be delivered straight-faced and ever so dry.  He was always ready to talk to a willing ear, and could weave a story that was almost unbelievable, except he really lived those tales.  He loved life, and could be found having coffee at the café with friends, loved playing cards, and enjoyed celebrating holidays with family.  He started a coffee club at the Ostrander Assisted Living facility, entertaining the residents with his memories and humor.

He was preceded in death by the love of his life and beloved wife Betty, his step-son Steven Aide, his parents, siblings Jim, Anton, Bill, Ted, Jerry, Claire, Ann (Heppelmann), and Carl; and nephew Brian Eggler.

Those left to cherish his memory include his sister Helen (Eggler), brother-in-law and close friend Bob Nelson, and 30 nieces and nephews.

Funeral Mass will be held on Friday, February 19, 2021, at 11 a.m. at St. Ignatius Catholic Church in Spring Valley, Minn.  Visitation will be held one hour prior to the service at the church.  Interment will be at Ft. Snelling following.  Masks and social distancing will be required for both the visitation and funeral Mass.

Eugene was proud to support the Red Cloud Indian School in Pine Ridge, S. Dak., where Jesuit Brother Claire Simon, SJ, served for over 40 years.  In lieu of flowers, memorials are requested for the Red Cloud School (www.redcloudschool.org).

Rest easy, sailor, we have the watch.  Condolences may be left at www.Hindtfuneralhomes.com.