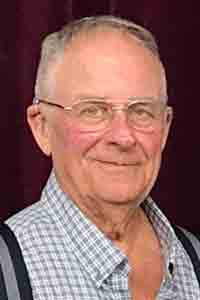 He was born September 5, 1944, in Caledonia, Minn., to Marvin and Ella Mae (Schroeder) Meiners. Dee was a 1962 graduate of Caledonia High School. In 1962, at the age of 17, he enlisted in the United States Navy and served three years on active duty as an electrician. On April 9, 1966, Devoine married Barbara Jean Hagen at Trinity Lutheran Church in Spring Grove, Minn., and they have shared 55 years of marriage.

After his military service, Dee farmed near Eitzen for four years. The family then moved to Windom, Minn., where he repaired electric motors and sold farm equipment. In 1982, he bought a farm machinery business in Wykoff, Minn., and called it D & B Agri Systems.  After eight years, he began to transition to fertilizer and soil consulting, which became MN Bio-Ag. In 2018, Dee proudly handed his business over to his son Brandon, who continues to run it today.

He was preceded in death by his mother Ella, father Marvin, and sister Jeanette, in infancy.

Funeral services will be held at 11 a.m., Tuesday, May 4, 2021, at St. Luke’s Church, Eitzen. Pastor Michael McCann will officiate. Burial will follow in the St. Luke’s Church, North Cemetery with military honors by the Kenneth Casey VFW Post 5603 of New Albin, Iowa, and the United States Navy Funeral Honor Guard. A visitation will be held from 9 a.m., until the time of service, Tuesday, at the church. Social distancing guidelines are recommended. The service will be live streamed and will be viewable on the Facebook page of Michael D. McCann, Eitzen, Minn.

In lieu of flowers, memorials are preferred to the Eitzen Fire Department or the Kenneth Casey VFW Post 5603 of New Albin.

Jandt-Fredrickson Funeral Homes and Crematory, Caledonia Chapel, is in charge of arrangements. Online condolences may be offered at www.jandtfredrickson.com.