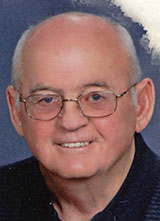 Dave was born to Ingolf and Alma Sunde on March 11, 1935.  He was raised on the family farm in Kenneth, Minn., graduated from Augustana Academy, and served in the United States Army from 1958 to 1960.  Dave married Kay Applen in 1961, settled in Preston, Minn., and was married for 52 years until Kay’s death.

As a surveyor for the Fillmore County Highway Department for 39 years, Dave always had a story to tell about those he met – both characters and critters – while on the job.

The Minnesota Vikings, Twins, and Gophers were his favorite teams.  He loved to bowl, often bowling for two teams during a season.  Many good friends and good times from the early years at the B&B Bowl.  Dave enjoyed traveling the backroads of his county, state, and country. His other interests included reading, crosswords, board games, and American and military history.  Did someone say cards?  Deal him in!

A private burial will be held at a later date.  A gathering to remember Dave will be held at the B&B Bowl and Restaurant in Preston, Minn., on Monday, October 18 from 1-3 p.m.  All are welcome.