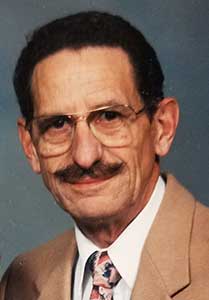 David Runkel from Harmony, Minn., passed away peacefully on November 18, 2021. He is preceded in death by his brother Robert and sister Alta (Polley). He is survived by his wife JoAnn of Harmony, brother Dan (Terry) Runkel of Rochester, sons Rob Runkel of Boulder, Colo., and Kent (Kelly) Runkel, of Redwood Falls, and daughter Julie (Brad Redfield) Runkel of Pine Island; as well as seven grandchildren and seven great-grandchildren.

He was born in Winona, Minn., on April 21, 1937, and was known as “Dave” to many Harmony locals, “Toby” to long-time friends and relatives, or “Mr. Runkel” to hundreds of high school students. Following high school, Dave attended Winona State University where he met JoAnn and obtained a Bachelor of Science degree. Dave and JoAnn married in 1962 and lived for a year in Oklahoma while Dave served in the United States Army. They moved to Harmony in 1964 where he began a 33-year career as a high school science teacher.

“Mr. Runkel,” an avid Packers fan, was known for his lively banter with students (Vikings fans), taking students to the Nobel Conference in St. Peter Minn., making lucky students have their hair stand on end, and passing around a mysterious black box. He was an active participant and office holder in numerous educational organizations, including the Minnesota Education Association. He was also active in the Harmony community, serving as a council member and mayor for 23 years, as a member of the Harmony Lions club, and on the volunteer ambulance. He spoke softly, never wanted to be the center of attention, and always had time for others. He thoroughly enjoyed time with his family, time on the Mississippi River boating and fishing, drinking coffee, and his work in the community.  He always told his children to “have fun” when they departed for school, work, or travel, and we always did our best.

In lieu of flowers, memorials may be directed to the United Methodist Committee on Relief umcmission.org/give-to-umcor, Lions Club International www.lionsclubs.org/en/donate, or the charity of your choice.

Lindstrom Funeral Home is assisting the family with arrangements.