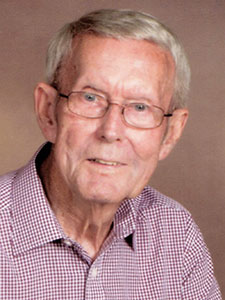 Curtis was born April 28, 1930, to Henry and Betsey (Ramsey) Berge at Lanesboro, Minn. He grew up on his parents farm near Lanesboro along with his eight siblings, enjoying the quiet serene life of country living. Curt attended Lodahl Country School until the eighth grade, then went on to Lanesboro Public School. He served for two years in the U.S. Army with the First Armored Division, basic training in Ft. Knox, Ky., then in Munich Germany for 19 months, being honorably discharged in 1953.

He married Arlene Rude, September 25, 1954, in Peterson Minn. They resided in Minneapolis for 16 years before moving to Shakopee in 1969. After retirement they spent 20-plus years during the winter months as snow birds in Mesa, Ariz., enjoying the warm climate along with a wide circle of friends.

He was a member of St. John’s Lutheran Church, the VFW and the American Legion in Shakopee. Curt did volunteer work and kept busy with woodworking and reading. He enjoyed fishing and boating at his lake place in northern Minnesota, and loved doing things with his family.

Curt is survived by his wife of 66 years, Arlene; daughters Debra (Jack) Ranum of Fridley, and Rene of Shakopee; granddaughters Brooke and Alison Ranum, sister-in-law Jeanette Berge, many nieces, nephews, and cousins.

Condolences may be shared at www.mcnearneyfuneralhome.com.