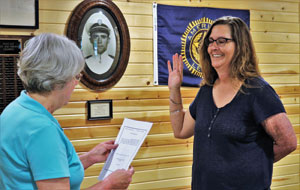 Tanya Cook is the newest member of the Whalan City Council in Whalan, Minn.   Cook filled the position left open when Johnny Halvorson resigned from the council in June due to health issues.

Following a motion by Berekvam and a second by Lewis, nominating Cook for the open council position, the motion carried, after which Cook was sworn in.

Minutes from the June 10,  council meeting were read aloud by Melander, with no additions or corrections requested.

The treasurer’s report and bills due were also read, with no additions or corrections requested. One invoice was set aside for Melander to investigate as there may have been an error in billing.

A resident expressed an interest in joining the Zoning Committee if a position becomes available.  The council thanked him for his interest and will be in contact with him if a position opens up on this committee.

Tuftin reported on the FEMA Floodplain Ordinance. A special public meeting on the matter was held prior to the regularly scheduled council meeting.  After some discussion, the council rendered their decision to adopt the ordinance.

Tuftin gave an update on pole and electric repair.  There have been some unexpected expenses in recent months due to storm damage.  The council will look at poles in town again, including a couple at the ballfield which are no longer in use.

The town hall roof continues to have a leak which needs to be addressed, as it is starting to damage the ceiling in the upper level.  Cook will be in charge of getting bids to fix the problem and will present information to the council.

A discussion was held on dust control and whether there is a need for application this year.  As it is getting late in the summer and with the amount of rain in the area lately the council decided not to have dust control done this year unless it is deemed necessary at a later date.

Tuftin shared a letter from the Minnesota Department of Natural Resources regarding weed control.  The letter informed the city of information pertaining to the use of herbicides and pesticides in relation to the state trail.  If the city plans to use herbicides or pesticides, it is necessary to contact the DNR in writing at least 20 days in advance so they can approve what will be applied.

Johnson expressed the need for the city to purchase new orange emergency cones, as the current cones are badly deteriorated.  Johnson will look into the cost of cones.

The next Zoning meeting will be August 12, at 6 p.m., with the regularly scheduled monthly council meeting taking place at 7 p.m. the same evening.  The public is encouraged to attend.