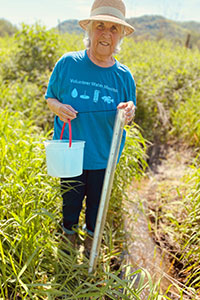 Intrigued by the changing conditions she saw in the creek flowing through her farm, Joan Redig of rural Houston County signed up for the Citizen Monitoring Program in 2017 after reading about the volunteer opportunity in a local newspaper.

She monitors Paradise Valley Stream in the southeast corner Minnesota. This region is known for its unique geology called karst. Here the erosive effects of water have sculpted thick layers of limestone over thousands of years. The landscape is characterized by abundant sinkholes, springs, caverns, and underground waterways. Karst is like the Swiss cheese of rock. As water flows through karst, it mixes above and below ground. This mixing means pollutants on land can easily reach groundwater used for drinking.

Springs create Paradise Valley Creek, which flows from east to west, spanning about two feet in width and about one foot at its deepest. Though a small stream, it can have a big impact on downstream waters.

Redig and her husband, Wayne Purtzer, moved to what she calls their “retirement” farm in 1999. About half the 125 acres is wooded and the other half is pasture or hay fields. Working with local conservation agencies, they put in a wildlife pond in 2003. The 3-acre pond holds back water, helping slow it down before it flows into Money Creek, a designated trout stream, then the Root River, and eventually the Mississippi River.

Holding back the water lets sediment and other pollutants settle out, as well as preventing erosive flows. This is especially true with more intense rain storms the past several years, including a flood that devastated much of the region in 2007.

Paradise Valley is aptly named for its lush landscape, rolling hills, springs and streams. It is also to home to several farming families as well as otters, geese, ducks, muskrats, sandhill cranes and more.

“The topography – you name it, we got,” Redig said.

She finds her stream monitoring for the Minnesota Pollution Control Agency to be a simple task. She walks down a field road once a week during the spring and summer, recording:

•The flow stage of the stream, from dry through high flows.

•Appearance of the water, ranging from clear to muddy and green.

•Rating the creek’s suitability for recreation, ranging from very good to very poor.

•Clarity of the water, using an instrument called a Secchi tube. By pouring stream water into a tube and lowering a black and white disc until it can no longer be seen, volunteers measure the water clarity from zero centimeter, being very cloudy, to one meter, being very clear.

The water reflects changes in the landscape draining to it, which can include changes in cropping practices and loss of buffers. Redig consistently recorded clear water in Paradise Valley Stream for 2017 and 2018, seeing almost to the bottom of the Secchi tube. Last year the clarity was much lower. This spring, after heavy rains, she found the stream flowing faster and foggier. She recorded her lowest clarity reading of 11 cm.

Noticing the changes in the stream’s condition, and being a member of the Land Stewardship Project, Redig advocates for conservation practices by making changes on her farm, visiting with neighbors, and speaking with local conservation agencies about the need for buffers and other practices that protect water quality.

Her conservation mindset stems from growing up on a dairy farm south of Winona, with a father who converted cropland to pasture and hay in the 1950s, and who practiced rotational grazing.

Redig and her husband once pastured the sloping hills above and below their hay fields, making sure to not overgraze them. They stopped pasturing about five years ago and Redig notices the slopes now hold much more water. The hills act like a sponge, soaking up runoff that could hurt the creek below.

She encourages other people to sign up to monitor a lake or stream. “It’s a rather simple thing to do… the instructions are very easy to follow.”

Redig also said, “I think the big thing is taking the time to observe. Where the stream is coming from. All the wildlife. Changes in the water.”

Learn more about the program on the citizen monitoring web page www.pca.state.mn.us/water/about-programs.