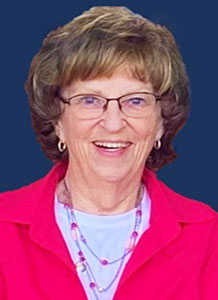 Charlotte “Char” A. Keene, 78, of Preston, Minn., was called home by her Lord and Savior on February 9. She passed away in her home surrounded by family after courageously living with a rare form of pancreatic cancer for 13 years.

Born to Stanley and Evelyn Moen in Galesville, Wis., Char graduated from Onalaska High School. She attended Western Union Technical School in Crawfordsville, Ind., and worked for Western Union for two years in Wisconsin and Minnesota.

In July 1962, she married Arnold “Arnie” Keene and was blessed with four children. First, living in Fond du Lac, Wis., then moving to Preston, Minn., in 1971. Char was a stay-at-home mom until 1977 when she began working for Dodge-Fillmore-Olmsted (DFO) Community Corrections; retiring in 2004, she stayed involved as a lead bailiff. She dedicated her life to serving others as a member of the school program committee that organized Block Parents (safe homes for students walking to and from school), Focus on Youth Team mentor program, Den Mother for Cub Scouts and Brownie leader, volunteering at Traditions of Preston and delivering Meals on Wheels. As a member of Christ Lutheran Church, Char enjoyed serving as a Sunday and Vacation Bible School Teacher, on the church council and WELCA Board, and was a member of the Christ’s Crafters group. She was also proud to support Arnie as a 45-year Lions Club member, serve as the chairperson for Preston’s Community Chest and treasurer for the Preston Park Board.

Char was preceded in death by her parents Stanley and Evelyn Moen, Onalaska, Wis.; her in-laws George and Mabel Keene, Sparta, Wis., her brother-in-law, Dave Rahn, and nephews Loren Tabbert and Reed Stone, all of Onalaska, Wis.

Continuing to give to others, Char donated her body to Mayo Clinic’s Anatomical Bequest Program and donated her eyes through the Lions Gift of Sight.