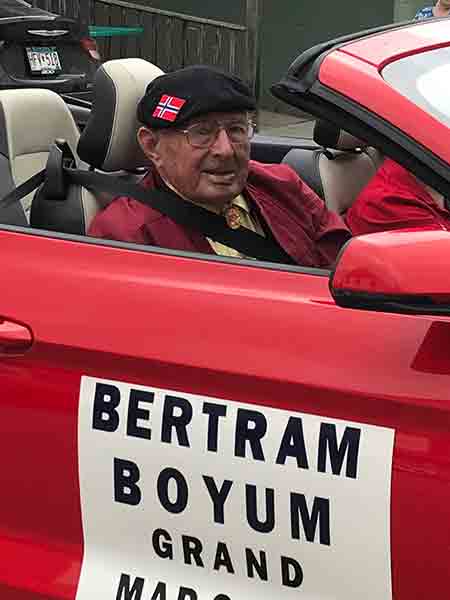 Bertram Boyum of Rushford will turn 104 years young in September. He lives in his own house, drives his own vehicle, and makes his own supper. Who else would you turn to for advice on aging well?

When asked what he credits for his longevity, he replied, “I don’t have the answer – I just keep going!” He then continued with some answers. First he said he must just be blessed with good genes. This certainly must be true; he shared that he remembers his great-grandparents on his mother’s side who migrated from Norway. His grandparents on his dad’s side of the family both lived into their 80s while his father reached 93 and his mother 90. Boyum is proud of the fact that he is 100% Norwegian.

Bertram went on to credit some of his habits as well. Boyum takes vitamins daily after being advised by his doctor 20 years ago that it would be beneficial. Bertram emphasized that vitamin D was particularly important. He takes 5,000 units of vitamin D daily as well as a multivitamin for men which adds another 1,000 units of vitamin D. He did caution with a chuckle that you don’t see immediate results from taking the vitamins, but he feels they affect your health generally and has no plans to discontinue what seems to be working!

A good healthy diet is a must according to Bertram. He himself eats “regular” meat, 100% whole wheat bread, potatoes, beans, lettuce – the old standbys – with very little sweets. He has been a regular at Semcac’s senior citizen dining program. He was recently congratulated on attending for 12 years without missing a day. He has nothing but praise for the program and its “amazing” workers. He loves the meals, the friendly, caring staff, and the amount of effort they put into preparing all those meals every day and serving them promptly. When asked his favorite food, Bertram was hesitant to name one, stressing that it’s important to eat a variety of foods. When pressed, he finally noted that he “always likes a good tater tot hotdish!”

Exercise is usually considered an important part of a healthy lifestyle. Bertram shared that he has never exercised per se, but has always kept active. His legs are weak right now so he has a hard time walking or exercising.

Boyum does indeed keep active. He served as grand marshal for the 2022 Gammel Dag parade; after the parade, he spent several hours handing out lessons in Norwegian to visitors at his table. Later, he, with the help of his son and fellow auctioneer, Murt Boyum, auctioned items to the crowd.

Bertram often drives to Preston to visit his daughter Loretta in assisted living. He also drives almost daily to do his errands in town.

A typical day for Bertram used to include going to coffee with the boys. He shared that a few small things can affect how he can now access a building, and misses being able to join the boys for coffee daily. If he doesn’t go for coffee, Boyum heads downtown to pick up his mail, then goes over to senior dining to play bingo and socialize until dinner is served at 11:30. He spends his afternoons reading newspapers – Fillmore County Journal, Winona Daily News, and Rochester Post Bulletin.

Reading those papers keeps Bertram thinking. He has opinions about the world around him. Boyum said our society isn’t what it used to be. He noted that 50-75 years ago, you never heard of a banker, lawyer, or person in a position of high responsibility “going bad,” but now it’s a regular occurrence. He called for a return to simple courtesies such as respecting women and saying thank you.

When asked what was good about today’s world, Bertram replied, “It seems they are trying to help low income people more.”

He makes his own simple supper — a glass of milk, a slice of whole wheat bread, lettuce, beans, and maybe an egg or cottage cheese.

Proudly independent, Bertram said he doesn’t need outside help. He succinctly declared that what makes him happy is his good health.

Bertram said he doesn’t see his family often, “We’ve never been together a lot. We talk a lot on the phone.” Bertram has a son, Murt and a daughter, Donna; nine grandchildren, 13 great-grandchildren, and one great-great-grandchild. While some live nearby in Preston, Chatfield, and St. Charles, some are in Texas, Colorado, and Florida.

Recently, his dear friend Muriel Hanson passed away. They had been friends for over 20 years; in their early years together they would go to polka dances almost every weekend. “Now I’m all alone,” Bertram sadly commented. “As humans, we aren’t intended to be alone.”

He’s still very appreciative for his blessings, “I thank God every day for another day. You won’t find many people in my situation; you’d have to look far and wide!”