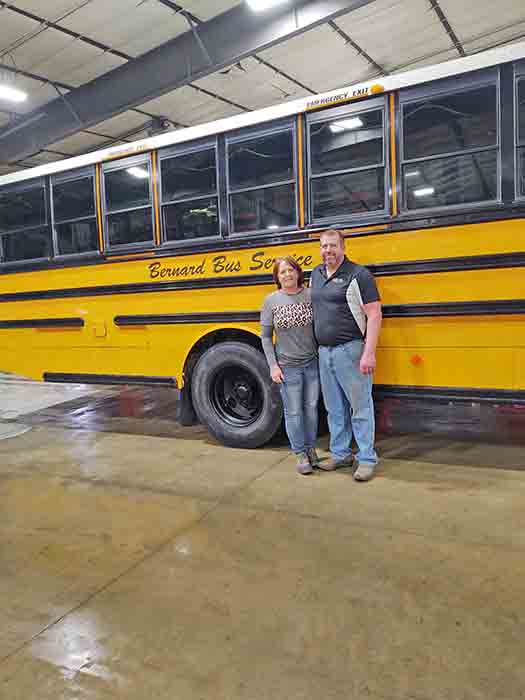 Locally owned in Chatfield, Bernard Bus Service is celebrating 75 years of family-owned business. Mike Bernard’s grandparents, Art and Evelyn, opened the business in 1947. Mike’s uncle was in charge when they retired with Mike’s parents, Chip and Lana, taking over the business in 1985. At that time, they had 9-10 routes in Chatfield with all the buses running on LP; they worked out of a one stall garage.

Right out of high school, Mike started driving buses for Bernard Bus in 1996 and worked there even earlier than that; he fully took over Bernard Bus Service in November 2011. Mike’s wife Lisa, a former Mayo employee, started working in the office in 2000.

Bernard Bus Service now has around 50 employees working at several locations to provide regular bus service to the Chatfield, Rushford-Peterson and Mabel-Canton districts; as well as “considerable work” for the Rochester School District and some work for Dover-Eyota and Lewiston districts.

During the early COVID period in the spring of 2020, Mike was totally bored; he decided to diversify and expanded into construction and pond restoration and building, something he had experience in. In 1997 he had bought eight dump trucks and bulldozers and moved 130,000 yards of fill in the area of his current building. This new business helped keep his bus drivers employed over the summer. Mike’s oldest son Josh is interested in continuing in the construction business.

Bernard Bus Service was looking at other business ventures but they “fell off the radar” with the lack of access to new vehicles.

The charter bus service is slowly starting back up with casino trips. Tours have been difficult to schedule a year out with the ever changing COVID restrictions and effects, but schools and colleges have begun to charter coach buses again.

Mike had always told his kids they would need to go to college two years or more and work for someone else before they could join him in the business. With the arrival of COVID, his kids stayed home and worked for the company. Daughter Kaylie worked at Bernard’s from March 2020 through June 2021, at which time she became a bank examiner. Youngest son Nate drives vans for the company and is a “future school bus driver” to quote another driver. Nate declared, “It’s better than working for somebody else!”

Mike has been having his children do more; when they ask his advice, he responds, “What do you think you should do?” When Mike went to present a bid to the Mabel-Canton district after a surgery, he took along his daughter to help in the process. He’s also taken his sons along to negotiate other contracts.. Mike proudly shared that his kids really stepped up to help when he went through cancer and said they probably will take over the business eventually.

Both Lisa and Mike feel that the biggest challenge right now is to find enough drivers. People think that kids won’t listen to them. Bernard’s sends the discipline forms directly to the schools and the principals are great at dealing with them. Quite a few college students drive for the company. Mike went on to say that the older students usually drive themselves instead of riding the bus.

In an effort to make it easier for potential drivers, the company provides the training for drivers on site as well as in house drug and alcohol testing. Their bus drivers receive $35/trip—a total of $70 a day for 1 ½ hours of work.

Mike needs to make adjustments due to COVID “every day!” Last week he had two drivers out with COVID,  five out on medical leave, and a couple who had gone south for the winter; as a result he had to scramble to cover the routes. Combined with schools adding more sporting trips now and every district and bus company short on drivers, it brings more demand for drivers. He encourages anyone interested in driving to contact him.

Mike himself declares that what he enjoys most about the business is the kids! “Anybody that drives a school bus, enjoys it!”

When asked for fun stories about driving, Mike commented that he has too many to tell, “Just when I think I’ve seen everything, something else pops up!”

Mike went on to share that he has only been stuck once driving a bus — “and then they brought me a tow truck and I pulled myself out!” he continued.

Don Johnson, a retired trucker who was looking for something to do in retirement, started driving for Bernard’s again a few months ago. He said what he enjoys most is being able to go to sporting events. “It gets me out and about, and I’m not getting up at 3 a.m.—really its mostly getting to see the kids!”

Bus driver Lyle Svenningson chuckled, “It’s a terrible job!” He proudly shared that he’s driven bus for 46 years, hauled the current Rushford Police Chief (Adam Eide) to school and is now transporting grandkids of some kids he originally had on his bus route. At 75, he still enjoys driving bus and doing service on the buses such as oil changes and greasing.

Mike Bernard plans to celebrate Bernard Bus Service’s 75 years in business and his drivers on the last day of school in June — keep your eyes open for details to come!