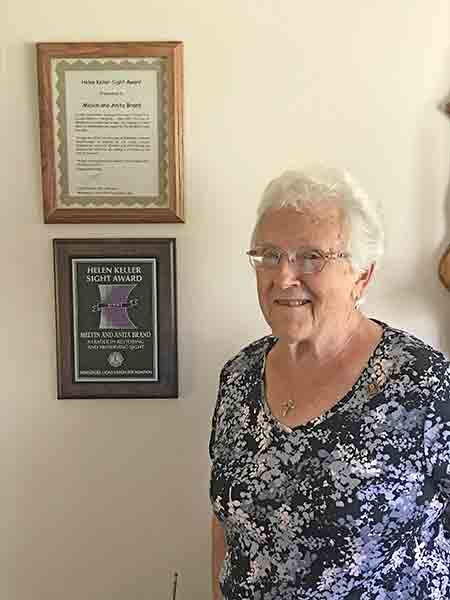 Recently, longtime Lions Club member Anita Brand was honored with the Helen Keller Sight Award given by the Rushford Lions Club. There have been only five or six such awards given in the history of the club since the inception of the award in 1960.

According to Lions member Larry Bartelson, this award was most unusual in that it was given to both Anita and her husband Melvin; typically, only one person receives the award. In addition, their son John also had received the award over 20 years ago.

Helen Keller had challenged the Lions of the world to become “knights” of the blind in 1925. In response, the Lions of Minnesota established and continue to support the Minnesota Lions Eye Bank. Research conducted has found breakthroughs in diseases of the retina, macular degeneration, cataracts, glaucoma, and other eye diseases.

When Melvin Brand passed away in December 2021, the family asked for donations to support the Lions Eye Bank and their efforts; this was a focus of the Brands for many years. Melvin had been a member since 1974 and served in all the local offices of the Lions Club as well as as Zone Chair, Region Chair, Vice-District Governor in 1996 and District Governor of Minnesota’s five southeast counties in 1997 and 1998. He also served on the Camp Winnebago Board for six years.

Since Melvin was so involved in the Lions, he encouraged Anita to join as well. This led to lots of travel, especially during the time Melvin was district governor since he was expected to visit all the clubs in his district.

One of the highlights of that time for Anita was attending the Leader Dogs for the Blind training program in Rochester Michigan. Melvin and Anita had the opportunity to see all the training. At the end of the program, they were blindfolded and challenged to walk around the block using a guide dog so they could experience using the dogs.

Anita also remembers spending nine days in Philadelphia at the international Lions convention during that time. Since Melvin was a district governor, they participated in a huge parade.

To Anita, the best part about being in the Lions organization was making friends all over the country. Those friends have continued to stay in touch over the years and get together once a year.

Anita fondly recalls the many banquets she and Melvin attended. As governor, Melvin wore a white tuxedo, and Anita dressed in formal dresses. At meetings, they both wore blue blazers. When they first were in Lions, members had to be invited to join, and meetings and installations were “done by the book.”

Anita would like to see a return to the mission of the Lions organization. When Chicago businessman Melvin Jones began the Lions Club in 1917, he had encouraged new members saying they should, “reach beyond business issues and address the betterment of their communities and the world.” Melvin Brand received the Melvin Jones Award and had worked to achieve the mission of the club worldwide.

Larry Bartelson noted, “It didn’t take me too long to realize that Melvin Brand was Mr. Rushford Lion. He was the epitome of the Lions — he served the community and gave back.”

During the flood of 2007, Anita and Melvin opened up their garage to the people of Rushford. The garage was stocked full of clothing and supplies sent by Lions Clubs in the area.

In addition, the local Lions served many meals at Montini Hall to the people cleaning up after the flood.

Currently, the Rushford Lions do a fundraising pork chop dinner during Rushford Days as well as support the local school by serving as crossing guards at school, water the Rushford flower baskets, and create the Lions birthday calendar.

Anita now lives at Bremmer Suites in Rushford and spends her time on embroidery, puzzles and word searches as well as activities provided there. Her new award is proudly displayed on her wall.

Always a “people person,” she enjoys visiting with her new friends at Bremmer. Anita has four children, 11 living grandchildren and two deceased, and 25 great-grandchildren with another one on the way.

Anita is looking forward to the Lions’ mid-winter convention at which Melvin will be honored with a picture included in a PowerPoint of recently passed Lions and a candle lighting. You can bet Anita will enjoy seeing and visiting with all her Lions friends who also support the mission of Lions — to address the betterment of the world. Congratulations to Anita Brand on receiving the Helen Keller Sight Award!