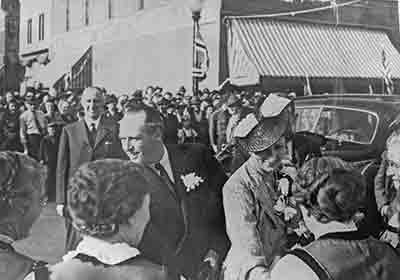 Americans have a fascination with “royals” it seems, from the “Crown” of Queen Elizabeth to Princess Diana to Harry and Meghan. More proof—the popular new PBS television series “Atlantic Crossing” that offers not only a “Norwegian” flavor to that fascination but a connection to Lanesboro, Minn., history as well.

“Atlantic Crossing” tells the story of Crown Princess Martha of Norway and her close friendship with U.S. President Franklin Roosevelt in the early days of World War II. It is 1940, the Nazis have invaded Norway, and Roosevelt invites Martha (and her three children) to find safe haven in the White House in Washington, D.C. while her husband, Crown Prince Olav, remains in England to help organize Norway’s resistance to Hitler’s aggression. It’s a dramatic, somewhat romanticized telling of that story (“inspired by true events,” we learn), but based on actual history. The fact that Princess Martha exerted strong and personal influence to persuade FDR to help Norway — and all of Europe — fight off the Nazi war machine has been well-documented and discussed for decades.

That happened in 1940. Go back a year to 1939 and you find a small crowd of European royalty showing up on U.S. shores. (King George VI and Queen Elizabeth — the current queen’s now-deceased “mum” — even came over, becoming the first reigning monarchs from the U.K. to visit America). Why all those royal visits? The most public reason was the extravagant World’s Fair opening in New York. Perhaps just as important, war fears were escalating in Europe, and an opportunity to build potentially useful ties with a still-officially “neutral” United States was too crucial for these national leaders to ignore.

Norway’s Crown Prince Olav and his wife, the Crown Princess Martha, came to New York in April 1939, where they officially dedicated the Fair’s Norwegian exhibit.  From there they traveled to nearby Hyde Park, the Roosevelt’s family residence, where Olav and Martha first met Franklin and Eleanor, the First Lady.  After that visit, the Norwegian royal couple embarked on a massive, probably exhausting 10-week railway tour across the continent, from east coast to west, from New York to San Francisco and dozens of stops in between. They saw Chicago, the Grand Canyon, Los Angeles, San Diego, went skiing at Washington’s Mt. Rainier (Olav was an exceptional athlete who had competed in the 1928 Olympics), and rode horses in Yellowstone National Park. They also visited Lanesboro, Minn.

Why little Lanesboro? As it remains today, the upper Midwest had become the center of Scandinavian-American life and culture in the U.S. During the late 1800s thousands of immigrants from Scandinavian countries said goodbye to the “old country” and poured into America, with many making their way westward into southeast Minnesota and northern Iowa. For a number of reasons, Spring Grove (with its famous Norwegian Ridge settlement) and Lanesboro became two key “magnets” for those newcomers.

“Lanesboro is the most Norwegian town in Minnesota,” claimed M.O. Bue, the famed Lanesboro photographer and a Norwegian immigrant himself. “Seventy-five percent of the people who live here speak Norwegian, including a few Irish residents as well.” So, in 1939, if the Norwegian royal couple wanted to build strong ties with their countrymen (and women) in the United States, these parts of Minnesota definitely needed to be on their itinerary. The couple (also celebrating their 10th wedding anniversary) made visits in late April and early May to towns like Decorah, Spring Grove, Spring Valley, Preston (where local  Boy Scouts proudly presented them with a locally-caught five-pound German brown trout), Wykoff, Harmony, Blooming Prairie, Grand Meadow — and Lanesboro.

Lanesboro’s moment in the spot light took place on the afternoon of Monday, May 8, 1939. An estimated crowd of 3,000 people squeezed into town, jamming both sides of what is now Parkway Ave., to welcome Norway’s Crown Prince and Crown Princess. Norwegian flags and bunting decorated cars and buildings, and many royal-watchers, organized by the local Sons of Norway Lodge, were dressed in traditional Norwegian bunads. The 10-limosine “parade” was over an hour late in arriving from Decorah, but local news reports describe the crowds (photographed by Bue, of course) as enthusiastic and eager to see the husband and wife who would one day be the King and Queen.

They finally arrived, Olav and Martha stepped out of their car, shook hands with local dignitaries and Sons of Norway members, graciously accepted gifts of flowers from Lanesboro children, got back in their car, and drove away. The entire visit lasted about five minutes.

But, it did happen, it was special, and it became a great local memory (as it was for all the towns they visited). Olav, then 36 years old, went on to serve as a key military advisor in the Norwegian resistance during World War II. Martha, then 38, returned to the U.S. with her children in 1940, where they stayed for the next five years until World War II ended. When she returned to Norway she became as an extremely popular and active national leader. Sadly, her “queen ship” never happened. Suffering ill health for many years, she died in 1954 at the age of 53, three years before her husband ascended to the throne at the passing of his father. (Their son, Harald, now 84, is the current King of Norway).

A statue of Crown Princess Martha of Norway stands at the official Norwegian residence in Washington, D.C. Did she really play a secret, even mysterious role in the outcome of World War II? Watching the eight-episode drama of “Atlantic Crossing” might offer some clues. What we do know for sure is that this special lady (and a man who would be king) once walked the streets of Lanesboro, Minn. Whether or not you’re Norwegian, that’s still pretty cool.