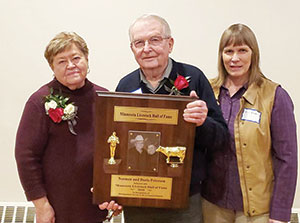 In the 86-year history of the Minnesota Livestock Breeders Association Hall of Fame, there have been three inductees from Wykoff. Hog breeder, Henry A. Derenthal was inducted in 1949, and this past March, Normen and Doris Peterson were inducted for providing exceptional service to the livestock industry.

“The Petersons are good and honest people who treat their customers very well,” describes Doug Tuman, President, Minnesota Livestock Breeders Association, who has known the couple for years. “Normen and Doris strive to please their customers.”

The Petersons own and operate Pete’s Auction and Photo Inc., petesauctionandphoto.com, located on the family farm, Toppy Hill, north of Wykoff. The farm has been in the family for close to 150 years.

Normen Peterson’s interest in the dairy industry began as a charter member of the local 4-H club, which lead to owning a herd of registered Ayrshires and Holsteins. Peterson’s first business was fitting cattle for sales and shows, followed by a long career as an auctioneer and a livestock photographer.

At that time, Peterson (22) was told that he was the youngest farmer to win a national grand champion.

The International Dairy Show was held in December, and due to a snowstorm, the official livestock photographer was not able to get to Chicago. Peterson did not get a professional photo of Dairymaid. They did not have the All-American cow that year because they did not have a picture to submit with the nomination.  At that time, there were only three or four livestock photographers in the United States.

Peterson realized there was a need for livestock photographers in the Midwest. Sixty years later, Peterson’s library contains 45,000 photos of dairy cattle from 25 states and four foreign countries. 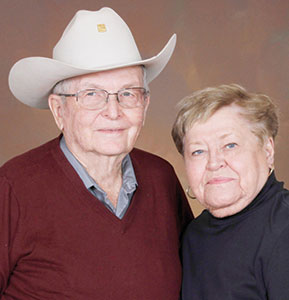 Doris Peterson self-identifies as the company’s support staff. Walking into the office and a few minutes chatting with the two of them, it is clear that support staff is not a 100% accurate description of her role. Doris Peterson manages the office and does the bookwork. In the beginning, she developed the film. Now you will see her setting in front of a computer post-processing digital images and designing auction catalogs.

Her husband spoke up and stated that his wife is also a photographer and takes wedding pictures. There are 1,000 wedding photos in their library representing six states and England.

The most memorable stories are frequently the ones when things don’t go as planned, as in the following two stories shared by Sue Krahn, the Petersons’ employee for the last 40 years.

Krahn explained that she and Normen were headed to a photoshoot in North Dakota. It was not the perfect day to take photos as it was windy, causing the camera and tripod to blow over. After a successful shoot, the duo headed back to Wykoff only to find out that all the photos were lost. Getting back in their vehicle, Peterson and Krahn headed back to North Dakota to retake the pictures.

Leaving at four in the morning from California, Normen and Krahn headed back to Wykoff to pick up their gear before heading to Wisconsin for a photoshoot. Arriving at the farm in Wisconsin, the farmer immediately told Normen that he needed to call his wife ASAP. He did and found out he forgot his camera. They hit the road and headed to La Crosse to meet Doris.  Turning around, they head back to the farm to take photos. Krahn mentioned that they did not tell the farmer why they had to go back to meet his wife.

Doris Peterson believes that her husband’s interest in auctioneering began as a young boy attending farm auctions with family members, listening to the auctioneer’s chant. Peterson began auctioneering as a young man fine-tuning his talent late at night on the drive home after dates with his wife-to-be. A few years later, he attended the World Wide College of Auctioneering in Mason City, Iowa.

Throughout his career, Peterson managed and auctioneered sales in eight states, including five national breed sales. He is now primarily working as a livestock broker.

As an auctioneer, Peterson has served as the auctioneer for the county’s 4-H livestock auction for over 25 years. He has also donated his auctioneer services for area fundraisers, including the ever-popular pie auctions.

Peterson shared that at one local fundraiser, he auctioned off three sour cream and raisin pies selling for $600 each.

In 1993, Brad Peterson joined the family business. Along with his parents, they own Toppy Hill Holsteins and White Crest Ayrshires, winners at county, district, and national dairy cattle shows. 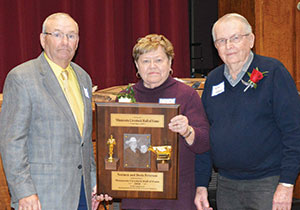 The Hall of Fame nomination highlights the Petersons’ volunteer service. Normen Peterson served nine years on the Minnesota Holstein board of directors, was a member of the executive committee of the 1989 National Holstein Convention held in Minnesota and chairman of the national sale that year. The couple also assisted with the National Holstein Convention sale when it took place on the stage of the Grand Ole Opry in Nashville, Tenn.

The couple has also served on the Fillmore County Extension Committee. Both are lifetime members of the Wykoff Methodist Church.

Doris Peterson summarizes that the most rewarding part of their business is the friends they have made over the years.