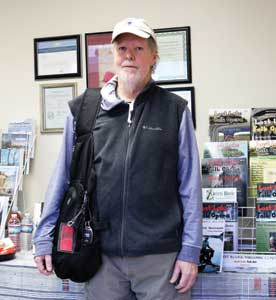 By assisting writers to become published authors, Tom Driscoll, Managing Editor and CEO of Shipwreckt Books Publishing Company, LLC, of Rushford, Minn., is not only helping the authors’ dreams come true, but he is also living a dream he never really knew he had.

After graduating high school, Driscoll began a student newspaper in Davenport, Iowa.  He was then drafted into the Army during the Vietnam War but was never sent to Vietnam.  Instead he was sent to Alaska, specializing in biological, chemical and radiological warfare.

Following his discharge from the Army, Driscoll got involved in the Iowa Writers’ Workshop and felt he was “in the right place with the right people,” where he could express his artistic side and absorb the rich talents of the other artists attending the workshop.

Driscoll worked in carpentry for a period of time and helped to construct a pavilion for the Dalai Lama’s first Kalachakra initiation in the United States in 1979. He was fortunate to meet the Dalai Lama as well.

Driscoll soon joined the Peace Corps and married his wife, Beth Stanford, while serving with the Peace Corps.  The two then began working for USAID in Africa and eventually in Washington, D.C., while living in Arlington, Va.

Throughout his life, Driscoll has always been a writer, writing for many publications including the Chicago Tribune, Wisconsin Architect Magazine, a weekly newspaper in Madison, Wis., and the Fillmore County Journal, among others.

Driscoll and his wife moved to Rushford in 2000 and after finishing a novel he had been writing, a friend suggested that he could self-publish the novel. Although he is critical of self-publishing as he finds it makes it difficult for an author to be taken as seriously, and has only self-published one of his own books, the off-handed remark by his friend got Driscoll thinking about publishing.

“I hadn’t said it to myself at the time, but I’m the perfect person to do that,” states Driscoll.  “I’ve written tons of poetry and letters and stories,” he says, adding, “I’m blessed with education, I have written and edited,” for many years.

Driscoll holds leadership skills from his time in the service and also is fairly fluent in a lot of graphic software and several other software programs, so it seemed like a perfect fit.

In 2010 Driscoll began publishing books, and in 2013 he incorporated Shipwreckt Books Publishing Company.

“I sort of stumbled into becoming a book publisher, but when I add it all up, looking backwards, everything in my life has directed me to this,” notes Driscoll.

“It’s like falling off a log,” says Driscoll, explaining, “it’s joyful to me, it’s not easy – it’s never easy, and yet it’s one of the easiest things I can do because I know how to do it,” as it has become second nature for him.

By publishing his magazine, Lost Lake Folk Opera, twice per year, Driscoll is also able to keep his writing skills honed, giving him the ability to live in the best of both literary worlds.  The magazine includes a variety of writing including stories, poetry and essays from Driscoll and several other authors.

“The best part of it is to be able to work with all these artists,” states Driscoll.  “It brings back to me that sense of I’m with the right people in the right place.”

Working with authors can be challenging as Driscoll says, “Every author, I think, no matter how many times they have been published, has a dream when they are talking to a publisher/editor that this book is going to sell and we are going to make some money,” and, “I’m the only voice of reason,” he states.

“One of the things that happens is things go very slowly for unknown authors – if nobody’s ever heard of you they still have never heard of you when that book is published,” says Driscoll.  It doesn’t happen overnight, but Shipwreckt Books can use their experience and online presence to promote the publications.

Marketing plays a big part in how well a book sells, which has driven Driscoll to become more active online with Shipwreckt Books at shipwrecktbooks.com.

“In the past year I have continually sold more books by different authors every month online that ever before and increasingly throughout the year,” states Driscoll.

Driscoll says he has currently published over 200 authors in the magazines and the books, a number that has grown considerably in a short period of time. “That’s a significant number now,” he states.  “I have data now on what happens when a small independent publisher like me publishes a book,” he adds.

Driscoll invests a vast amount of time in the authors he chooses to publish, sometimes spending years working with the writer.

“One thing about being a good editor, I think, is to understand what it’s like to be edited,” he says.

Author Judi Bergen, whose debut novel, Longing to Belong, was published by Shipwreckt Books, states, “Tom believed in my story, and he helped me make it better by his editing. The first thing he told me after he read it was that I rushed the ending, that I should let the reader enjoy the good ending more.  I wrote two more chapters before the final chapter because of his suggestions,” which improved the book greatly.

“Tom designed and formatted a professional book which has eye appeal,” says Bergen, which is an important aspect to grasp the reader’s attention.

Larry Johnson, author of Sixty-One, published by Shipwreckt Books, says he considers meeting Driscoll a “God thing,” saying, “It was a dream to meet Tom, a fellow Vietnam era veteran, who as a publisher, got what I was doing,” which made the connection between the two a strong one.

Johnson explains that when he finally decided to write his book, “My dream was to get it published and be able to talk more about it, especially in churches,” and Driscoll has made that possible.

“He did a lot of amazing work with me, and I think three years later it was published,” notes Johnson.

More than one of Shipwreckt Books Publishing Company’s books have been nominated for a Minnesota Book Award and Driscoll now receives approximately 750 unsolicited submissions each year.

Driscoll states, “Thank goodness I’m married to such a generous and supportive woman,” as he says, “my wife Beth is a big part of this success so far,” and with the two of them working together there is no doubt that the accolades Shipwreckt Books and its authors have received thus far is only Chapter One.