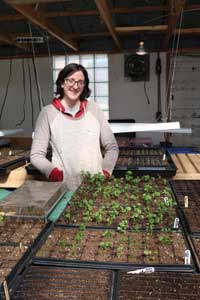 Sweet 16 Farm is so much more than a farm; it’s a destination.  It’s an experience all its own; it’s the adventure you make it.  It’s blue skies, sunshine and flowers rolled into a working, sustainable farm that has more to discover.

Sarah Mann and Daniel Drazkowski are partners in life and partners in creating Sweet 16 Farm.  Mann grew up in the St. Paul, Minn., area and says, “I visited this region when I was little, which is why I think I was drawn back to it.”

After attending school at  R.I.T. in Rochester, N. Y., and receiving a degree in photography and web design, Mann moved back to the Twin Cities but wanted something else.  She began working on a farm in New Prague, Minn., where she farmed a one-acre plot for about two years.

Feeling her heart tugging her in the direction of Bluff Country, Mann figured she could do graphic design work remotely after moving to this area.

While in the area looking at property, Mann reconnected with Drazkowski, whom she had know for a very long time.

Drazkowski grew up in the Pickwick, Minn., area and did some traveling as an adult, but his family is here, states Mann, which brought him back to the area.

The couple decided they both had the same dream of creating a sustainable farm and we thought, “Let’s do this together,” explains Mann.

They bought the property in the fall of 2010 knowing they had a lot of work ahead of them, but Mann says Drazkowski has a background in landscaping and handyman work, stating he is a “jack of all trades” and that pretty much everything they need built on the farm he can take care of.

“The first couple years were just renovating, and settling and exploring,” says Mann, as they renovated the farm house and got to know their property.  They did not officially move into the house until 2011.

After taking a course through the Land Stewardship Project the couple began a 1/3-acre hop yard consisting of approximately 250 plants.  They were told to pick a crop or specialty and go with it and, “It was a really great thing for us to pick,” states Mann, as Daniel does a lot of home brewing.

As they had a variety of cut flowers and vegetables, the couple started a farm stand and began delivering produce to local grocery stores.  “I’ve always gardened,” says Mann, explaining, “we’ve been doing it for ourselves and our families since we have been here,” so they decided to make a living from it.

The name Sweet 16 Farm came about as, “I really wanted to use our name to really pinpoint us,” says Mann, and since the farm sits alongside Hwy. 16 between Rushford, Minn., and Houston, Minn., the couple thought the name fit and incorporated the State of Minnesota and the Hwy. 16 sign into their logo.

A surprising and fun activity at Sweet 16 Farm that was not necessarily planned, but evolved, is disc golf.  “It started as a way to familiarize ourselves with the property, just cleaning it up and making trails. Daniel has always dabbled in disc golf, and as new things got mowed they expanded into greens,” says Mann.

Disc golf is available April through November with a pay box at the farm stand by the road.  Mann says, “Anybody is welcome to come in and spend the afternoon,” or however long they wish, playing disc golf and just enjoying the property.

Of the 240 acres of property, about two-and-a-half acres are actively farmed at this point and the couple enjoys exploring the property with their three-year-old son Sebastian, just soaking up the beauty and tranquility.

Mann and Drazkowski have decided to do things a little differently this year, as Mann says, “In the past we have done 15-20 different things, we’ve fully stocked our farm stand, we bring a bunch of different things to the local grocery stores,” but this year they will be “reeling it in,” she explains, saying they will be doing tomatoes and fresh herbs and won’t be manning the farm stand.

“This year we have kind of reigned it in a bit and our focus is primarily on cut flower production, and that’s both for mixed bouquet sales that we sell to grocery stores and made to order,” she states.

“The majority of our open fields are going to be in cut flower production,” notes Mann, saying she would like to dabble in weddings and events at some point but has not yet.

Sweet 16 Farm encompasses sustainability and community, as Mann says, “The more we can invite our community to experience and participate in what we have going here, then we feel like we are a part of something (bigger).”

Sweet 16 Farm hosts several special events each year, inviting the public to come out and tour the farm and enjoy the festivities.

The Co-op Farm Tour will be held at Sweet 16 Farm on Saturday, July 14, 2018, from 10 a.m. – 4 p.m.  This event is free and includes guided tours of the farm,  samples of home brew made with hops from the farm, live music, demonstrations and kids activities.  There will be cut flowers, produce and souvenir t-shirts, etc. available for purchase.  “The farm is basically open to the public all day long,” says Mann.

The Hop Harvest Fest will be held on August 25 and 26, 2018.  Camping is available at this event which also features music, local beer and mouth-watering food.   Suggested donation for this weekend long event is $35 for a weekend pass which includes camping or a Saturday only pass for $25.  Kids 16 and under are free.

Mann says having a sustainable farm is very rewarding as she explains, “Seeing people at our events, bringing flowers and produce to grocery stores is really rewarding,” saying both she and Drazkowski love to be participating and giving back to the community.