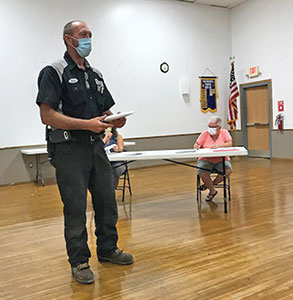 At their August 24 meeting, the Spring Valley City Council approved a pay increase for members of the fire department, beginning September 1, and effective when they are paged out for calls.  Council member Mike Hadland made the motion, stating that after the city’s recent increase in EMT pay, “I would like to see the hourly wage raised for the fire department.”  He suggested an increase from $10 to $15, “Because they haven’t had a raise in several years.”  His motion did not include an increase for training time, so that will stay at $10.

When asked about funding for the increase, Hadland replied, “In the budget, I think we can squeeze out for those guys that put their lives on the line for our community.”  The motion passed unanimously.  All council members were in attendance (Luan Ruesink, Chris Danielson, Mike Hadland, John Dols, and Mayor Tony Archer).  Also attending was City Administrator Deb Zimmer.

Deb Zimmer gave the council a summary of the draft of the city’s 2021 budget.  She highlighted a number of categories, which show a significant increase or decrease compared to the current year’s budget, and explained the reasons for the changes.  Overall, she said the draft budget shows an increase of $35,856 in overall expenses.  No action was needed on the budget this month.

Ken Cleveland addressed the council about an ongoing traffic safety concern.  He said he’s been trying to get changes made to improve the safety of the intersection of Highways 16 and 63 in Spring Valley, and he reported, “I finally got a call back.  It’s been over a year since my son’s accident over in front of Dairy Queen.  I’ve been trying to get a hold of MnDOT and everybody about getting something done with that intersection… MnDOT called me today, they’re still studying it. So, I’m not impressed and not getting anywhere.”  He suggested that perhaps if more citizens called MnDOT to ask for action, possibly that would help.  Mayor Archer agreed that the safety of the intersection is a concern, and he agreed that more complaints might get the ball rolling.  Mike Hadland asked if the mayor and/or city could send letters to the applicable lawmakers regarding this concern.  The council voted to approve sending such letters.

Zimmer brought up a proposal to use CARES Act funding to purchase Zoll Monitors for the ambulance service.  The resolution submitted to the council stated, in part, that, “Zoll Monitors allow for electronic transmission of information directly to the hospital while patient is being transported.”  The resolution also explained that the Zoll Monitors would facilitate efficient treatment of COVID-19 related symptoms, since the time to respond, evaluate and transport a patient to the hospital is 45-60 minutes.  Zimmer explained that CARES Act funding has strict guidelines on how the money can be used, but that this equipment would qualify.  The council voted to approve using $63,333.91 in CARES Act funds for this purchase.

Jesse Betts gave the council more information related to the requested purchase of squad cars.  Betts described the pros and cons of the suggested vehicles (Chevy Silverado and Dodge Ram).  Zimmer pointed out, “Right now, we have $73,000 in the Capital Fund designated for squad cars.”  It was pointed out that the city delayed some previously planned squad car purchases.  After discussion, the council voted to approve the purchase of a Silverado and a Ram.

Mike Zimmer gave a report regarding the ambulance service.  Regarding the city’s recent increase in the pay rate to EMTs, he stated, “The increase did make a difference.  There are a few that are stepping up, taking some more hours right now, which is nice.  I was actually able to go fishing on Sunday.”

The next regular meeting of the council will be Monday, September 14, 6 p.m., at the community center.  The public is welcome.