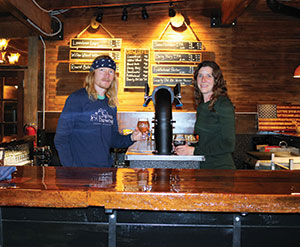 A new business venture means more opportunities for fun and relaxation in Lanesboro, Minn., as Sylvan Brewing has opened its doors.  Opening the business not only fulfills a dream Andy and Karen Heimdahl have had, but also gives local residents and tourists an additional option for making memories with friends and family.

“We were kind of looking for a lifestyle change where we wanted to be engrained in the community and offer something for our community as well,” states Karen.

When asked why they wanted to open a brewery, the couple explained that Andy has been home-brewing for years and enjoyed the process and the results.

To further his knowledge, Andy attended a year-long course in Brewing & Beer Stewardship at Dakota County Technical College in Rosemount, Minn., receiving his certificate in 2018.

Karen was very supportive of Andy fine tuning his craft telling him even if he just became a better home brewer from the course that’s ok and “having that kind of approval made it comfortable for me to try that out,” he says.

Andy interned at Island City Brewing in Winona, Minn., and at Karst Brewing in Fountain, Minn., so between college and interning Andy learned a lot about the industry and got to know more people in the industry.

“My career has been as a software developer and there are certain things that I have seen that software developers like to do as hobbies – beer brewing, woodworking, farming – things where we are creating things physically, and for others,” states Andy.  “It’s a creative outlet,” he adds.

“In software development, everything you make is usually hidden from the world – nobody knows what you’re doing or why you’re doing it,” he explains.  “People don’t look at it and say oh, that’s beautiful code,” he says.

“The thing with brewing, too – there is a lot of science involved, and math, so those are both things that kind of fit well with what computer programming is all about,” notes Andy.

“Just looking for the next phase of life, what to do with ourselves,” comments Andy. “I knew I didn’t want to sit behind a computer screen for the rest of my career.”

The couple had been contemplating opening a brewery for quite awhile.  They had looked at buildings in Lanesboro a couple years prior but decided it was not the right time.  “Knowing someone else would eventually do it – we knew that – we thought we just have to accept that,” states Karen.

About a year later they heard a rumor that someone had bought a building in town and were going to open a brewery.  They felt a bit of regret, but also wished whoever it was well.  They mentioned the rumor to Eric Luoma, owner of Karst Brewing in Fountain, and his reply was “the rumor is about you guys from a year ago!” “The rumor re-circulated,” says Karen, and it eventually got back to them.

“I think that did make us think about it more again,” says Karen.  They soon decided, “let’s do this,” and began the process.  As the Heimdahls live in nearby Pilot Mound, Minn., having a business in Lanesboro is a short commute.

Sylvan Brewing is located in the former Lanesboro Granary, which had not been used as a granary for many years and held a business prior to Sylvan Brewing, but the Heimdahls have made some additions and improvements.

Beautiful and unique restrooms, a new bar and new tables are just a few of the differences that will surely be noticed and appreciated by customers.  “Most of the work was on the lower level where the brewery is,” states Karen.  They also did quite a bit of work in the grain towers.

Local artist beyond compare, Karl Unnasch built the bar top and tables and helped with a lot of other things.  “We kept the footprint of the bar but completely ripped it out and redid it and put the new bar top on,” explains Karen.

One thing customers must search out when visiting Sylvan Brewing is the bird nest in the floor.  Unnasch found the bird nest while doing some work, and instead of covering it up, he decided to put a clear piece over it so it can be seen and appreciated.

According to the business website sylvanbeer.com, “Sylvan Brewing is Lanesboro’s first brewery in over 100 years,” and customers have been anxious for it to open.

The business had a soft opening on Thursday, October 15, 2020, which went very well.  “We have had a really good start,” states Karen.  “The word spread pretty quickly so we had a really great opening weekend” as well, she adds.

Karen states they are thankful for support from the community and from other businesses for the warm welcoming, as well as good friends helping on opening weekend.

Sylvan Brewing opened with six flagship brews: Lanesbrew Lager, Willow Wheat, Round Bale Pub Ale, Sweetbender IPA, Daisy Hazy IPA and Fiddlehead Porter.  A recently released seasonal beer, Gnarly Old Ale, which they call a “winter warmer” has been well received as have all of the brews.  “We knew the Lanesbrew Lager would be popular,” states Karen.  The other top two favorites have been the two IPAs.

Andy describes their selections in three categories: comfy, crafty and crazy, explaining that comfy is for those who aren’t familiar with or don’t think they like craft beer, crafty is for true craft beer, and crazy is for more experimental beers.  They find many people start with comfy and move their way over to the crazy selections over time.

“Familiar flavors in a friendly town,” is how Andy describes the business, and Karen explains the atmosphere as welcoming, relaxing and comfortable, where people can gather.  Be sure to take a growler home with you when you stop in, or customers can also take advantage of curbside service.

Sylvan Brewing is a family-friendly establishment and although they do not serve food, you can bring in food from restaurants in the area.  They offer pre-packaged snacks and non-alcoholic drinks such as chocolate milk and juice for kids.