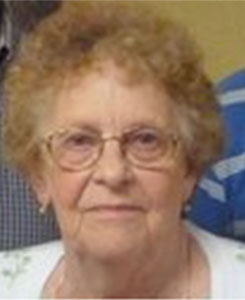 Eunice was born March 14, 1931, in Lanesboro, Minn., to Martin and Alma (Brekke) Eithun.  She graduated from Lanesboro High School in 1951.  Eunice married Neil Roger Applen on September 13, 1952, at Bethlehem Lutheran Church in Lanesboro.  After their marriage, Eunice and Neil lived in Harmony.  Neil was a salesman with Bear Manufacturing until the company was sold, so he was on the road much of the time, which left Eunice with the job of raising their four children.  We were lucky to have a mother that was able to stay at home with us.  Not sure how lucky she felt!  After the children left the nest, Eunice worked at Pete’s Café, the Cardinal’s Roost and Norsland Lefse. When Neil retired, they both helped out their son David at the Windy Mesa, in Harmony and Lanesboro.  Eunice and Neil moved to Lanesboro, where they lived at Sylvan Manor for many years, until Neil’s death in 2006.  In 2016 Eunice moved back to Harmony, where she lived at Clara House until it was time to move to the care center in 2018.

Lindstrom Funeral Home is assisting the family with arrangements.