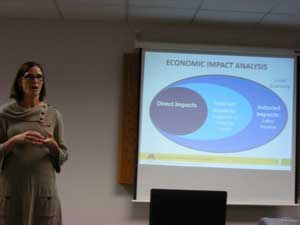 The effort to have a veterans home built in Fillmore County has been ongoing for more than three years. Committees co-chaired by Don Gildner in Preston and Bill Rohe in Spring Valley know the road ahead will be a long and challenging one, but well worth the effort.

A study was completed which demonstrated the need. There are about 23,000 veterans over the age of 65 within a 90-mile radius of Fillmore County. Therefore, there is a significant demand at least through 2040. The catchment area in southeastern Minnesota includes 15 counties where 33% of Minnesota’s veterans live. There currently are five state veteran homes in Minnesota: Fergus Falls, Hastings, Luverne, Minneapolis, and Silver Bay.

Preston and Spring Valley have each offered to donate land and infrastructure for a veterans home.

Preston and Spring Valley shared the expense to hire University of Minnesota Extension to analyze the economic impact of the proposed veterans home in Fillmore County.

Brigid Tuck, senior economic impact analyst, and Maryam Moeinian, community economics intern, authored the report. Cathy Enerson, EDA director for both Preston and Spring Valley, introduced Brigid who has been with the university since 2008. Enerson recognized area legislators that support the project. Congressman Tim Walz has stated that there is a need for long term care services for veterans in southeast Minnesota. There is broad community support within the county for a veterans home.

Brigid reviewed the findings at an October 25 meeting held in Preston. The proposal is for a 72 bed home. Construction of the home is estimated to cost about $30 million. The state would employ about 140 full/part-time people once the facility is in operation. Ben Johnson, legislative director for Minnesota Veterans Affairs, noted that wages and benefits are pretty good for state employees.

Construction will undoubtedly affect employment and businesses within the county as well as outside of the county. A little over $28 million is projected to be spent on the building itself. This construction is expected to require 180 employees, an estimated $7.8 million in labor income.

The construction of the home is expected to create over $35.8 million of economic activity in the county (nearly $60 million in the entire region), including $9.5 million of labor income, while supporting 234 jobs in the county. Fifty-four of those construction related jobs will come through industries impacted by the construction; for example, truck transportation, restaurants, retailers, banks, and so on.

Budgets of the veterans homes in Silver Bay and Luverne were used to estimate annual operation economic impact. The total direct effect is estimated to be $7.3 million with $6.2 million of that going to labor annually. This will support the employment of 140 at the facility.

Minnesota is enjoying a period of historic low unemployment. In April the Minnesota unemployment rate was 3.8%. The fastest growing industry in the state is health care.

The study found there are adequate skilled health care workers living Fillmore County. Hundreds of these skilled health care workers commute to work places outside of the county. Wages are lower in Fillmore County than in the five county region. There is now and will be in the future a competition for these workers. It may be necessary to offer higher wages to attract these workers. Other incentives, including a minimal commute and quality of life, will aid in recruiting the necessary health care staff.

It was noted that local educational institutions have pledged to train future workers for the veterans home.

Enerson said members of the committees have visited several veterans facilities. It is expected in the new facility every veteran will have an individual room with a private bathroom.

County Coordinator Bobbie Vickerman stated it already is a struggle to get applicants for public health nurse positions.

The $30 million needed to build the veterans home requires a 33% match from the state or a combination of state/local funding. Two-thirds comes from the federal government.

There are ongoing efforts for state veterans homes in both Bemidji and Montevideo.

Our legislators have introduced bills to get state funding for a veterans home in Fillmore County. If state/local funding is secured there still is significant competition for limited federal dollars. Once the state match is secured it would give the project a higher priority at the federal level.