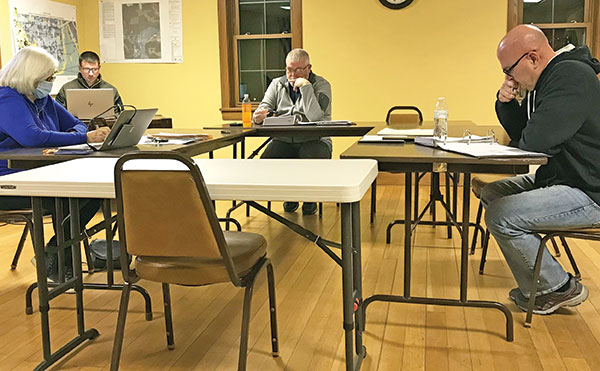 Carole and Gene Yenter visited the Peterson City Council meeting January 12, 2022, to discuss donating a bench to the city in memory of their son Larry. The Yenters had done their research and brought a picture of their choice of benches. Council member Gail Boyum told the couple that they had chosen the exact style from the same company as the city had gotten previously. She told them the city could order a bench for them and take care of the personalizing through Holstrom’s Gift and Jewelry in Cresco, Iowa. Gail will contact the bench company for pricing and Yenters will then reimburse the city for it.

Councilman Chris Stenzel reported on his research for a new city sign near state highway 16. He had found a sign that would be 10 feet wide and just six inches shorter than the current sign. The sign could be made to fit perfectly between the current pillars as is.  Both Stenzel and Boyum, however, felt that the sign should be turned 90 degrees so it would be seen more easily from the highway as it was approached from either direction. Currently the sign runs parallel to the highway; with the curves in the highway right before the sign from both directions, drivers often miss seeing the sign. Gail also stressed that the greenery at the base of the sign should be eliminated and replaced with rock for easier upkeep.

Mayor Tim Hallum suggested running power either underground from the bridge lights or adding lights to a pole near the sign. Hallum felt the sign should be lighted to improve its visibility to people driving by on the highway.

The ballpark estimate for the sign is around $3,400. Chris Stenzel will follow up and get an exact price to bring back to the council for consideration.

Gail Boyum reported that 50 homes were lit for Christmas; each home brought a $5 donation to the area food shelf. The council will be sending $250 to the food shelf.

The city’s Christmas lights were “kind of pushed” in the recent winter storm, but Public Works Director Rick Lee didn’t think they had been damaged. The council directed Lee to take the Christmas lights down in the middle of March.

Since this was the first meeting of the year, positions on the council, representatives for committees, and official bank, newspaper, auditor, and attorney needed to be chosen.

Tim Hallum will continue as mayor, Chris Stenzel will serve as acting mayor when needed, Gail Boyum will be acting clerk/treasurer, and Chris Stenzel and Tracy Seelbinder will be on the finance committee.

The official bank will be Rushford State Bank, the paper will be the Fillmore County Journal, the auditor will be Engelson and Associates,and the city attorney will be Nethercutt Scieber PA from Harmony, Minn.

The next meeting of the Peterson City Council will be February 9, 2022 at 6 p.m. The public is welcome to attend.