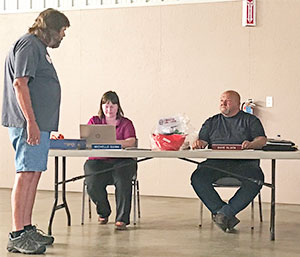 Once again, the proposed OHV trail took center stage at the Houston City Council meeting July 12, 2021. With many anti-OHV trail citizens in attendance, the council decided to proceed with the planned noise study for the trail. Both the council and the anti-OHV group agreed that the noise study needed to be done to provide solid data about the effect the trail would have on the city. Councilman Mathers urged that the study take place asap.

Steve Westby presented a 400-name petition to the council requesting the council stop the OHV trail. He urged them to go to the state and simply state they no longer wish to be a part of it; he added that his group was willing to help in that process.

City Administrator Michelle Quinn clarified that over $516,000 in grant money would need to be returned to the state, and that ownership of the land purchased would revert to the state as well. In order to repay the $516,000, the city would need to levy for the money; as a result, taxes in the city would go up. Quinn and Mayor Olson added that the previous petition about the trail had no legal bearing.

When asked by a citizen if the council was willing to work with a committee to try to reverse the trail involvement, Mayor Olson answered, “Yes.”

Cody Mathers added there was not a “kill switch” on the project, but the public wanted to know where the council stood.

Councilman Tony Schultz explained that the purpose of the current committee was to move forward and answer questions about the trail. A separate committee would be needed to work on this. After discussion, the council decided to create such a committee and encouraged interested people to sign up for it.

An archaeological study that needs to be done and paid for by the city in order for the trail work to proceed was tabled. The council opted not to “go further in the hole.”

An informational OHV trail meeting with DNR representatives was set for August 10, 2021. The time and location have yet to be determined.

Anna Benda addressed the council to offer the donation of $500 from Save Our Bluffs to purchase a sound system for the community center. Benda, an IT tech, volunteered her services to install the system and asked the council match the $500 donation to cover the cost of speaker cables and stands. Each councilperson would have a mic and there would be two available for visitors. She also suggested that carpeting the room, adding a dropped ceiling and soft materials to the walls would help with the echoing in the room. Benda declared, “This is a bandaid – the city is required by law to provide the ability to hear.”

The council has already started to research acoustical tiles for the ceiling; they decided to wait to decide on the sound system until they had more information on the tiles. The next council meeting will moved back to the city council chambers; this room will hold approximately 30 people.

Benda asked if the council would consider broadcasting their meetings live on Facebook. Quinn plans on researching the laws regarding this before the council proceeds with this. A hold was put on the sound system donation offer.

Details of what Cody Mathers calls a crisis for the ambulance were reported to the council. Currently, they need an additional 10 EMTs to fully staff the ambulance. Some of the barriers are the fact that EMT training is a 160-hour course over a 16-week period; the course is offered infrequently locally. Many people work outside of the community, and many businesses require EMTs to use personal time off if they go on an ambulance call during work.

The city is in danger of losing its license if not fully staffed. It’s status would be first responder; the crew would need to wait for an ambulance response and the city would need to pay for it. An EMT is needed for each call. Quinn added that the school’s football games must have ambulance service available per the MSHL; this would cost the city $1,000 to hire an ambulance from elsewhere. Some cities now offer paid positions to encourage people to join the ambulance.

According to Mathers, the bottom line is that it will take the community to step up.

Kent Whitcomb offered the city a level two car charging station; this station would have the capability of charging two cars at a rate of 20-30 miles per hour. It would have an app to take care of billing. MiEnergy would also provide five years of charger, service, and connectivity. After that it would cost the city $325/year to maintain. The value of the charger is $5,100; the city would be responsible for the installation expense of between $1,000 to $3,000. No decision was made by the council at this time.

The next Houston City Council meeting will be August 9, 2021 at 6:00 pm at the city hall council chambers; the public is welcome to attend.