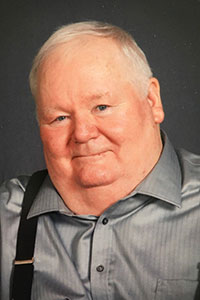 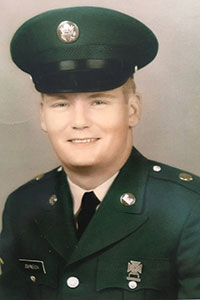 William E. “Bill” Johnson passed away Monday, October 19, 2020, surrounded by love near and far. At the age of 75, this big-hearted man in this tired body finally got the rest he deserved. Born in Ledyard, Iowa, on May 30, 1945, he had a humble beginning. The first 15 years of his life, Bill was raised and cared for in a variety of settings by many good people in Iowa, Minnesota, Oregon, and California. At age 15 he returned to Iowa where he ended up with his forever family.  At the age of 16 he was adopted by Lloyd and Mildred Johnson of Armstrong, Iowa. Working beside his father Lloyd was the joy of his life. He quickly got acquainted in his new high school. A certain red- haired girl apparently caught his eye during their many church and school activities. Six and a half years later, on June 15, 1968, Bill married his high school sweetheart, Arlene Burkhead. They celebrated their 52nd anniversary this year.

Bill’s passion was to be a high school agriculture instructor. That combined his love for agriculture and his desire to work with young people. His college career was interrupted in January 1966 when he was inducted into the Army. February 1967 he was deployed to Vietnam. He was assigned to the 2nd Battalion 33rd Artillery/1st Infantry Division. He was discharged in November 1967 as a Bronze Star decorated Operations and Intelligence Assistant.

He returned to University of Wisconsin – River Falls graduating with his BS in Agriculture Education in 1971. Finally, he was able to engage young students in the field he enjoyed so much. His first teaching job was in Bloomington, Wis., from 1971–1976. On July 1, 1976, Bill took over the position of Vocational Agriculture instructor at Spring Valley High School. During that time, he also held offices in the MN Vocational Agriculture Instructors Association. In 1986 he was put in charge of the Spring Valley Adult Farmer program.  Poor health struck him at age 42. With multiple medical issues, he was forced into early retirement at the age of 47. He stayed active in Spring Valley’s Kiwanis and Faith United Methodist Church as long as he could.

Bill’s focus changed to the youth in Spring Valley’s South Park with his Popcorn Wagon.  Soon “Popcorn Bill” was one of the most popular guys in town. For 35 years the Wagon served treats to kids of all ages. In 1997 his efforts to be a friend to these kids was recognized by being named the Kiwanis Citizen of the Year. In 2000 the Spring Valley Park Board honored his years of support with a sign dedicating the park as the Bill Johnson Recreation Area with the Popcorn Wagon logo.

In 2016 we left our home of 40 years in Spring Valley to move to an accessible facility in Rochester. The last two years Bill’s health has deteriorated. He has spent the better part of that time under the care of the good people at Rochester West Health Services. That is where we shared our final goodbye.

A celebration of life will be held next summer in Spring Valley. Burial will take place at the Minnesota State Veterans Cemetery in Preston, Minn. In lieu of flowers, memorials are preferred to the Spring Valley Food Shelf, Kiwanis Educational Foundation, or the Salvation Army.