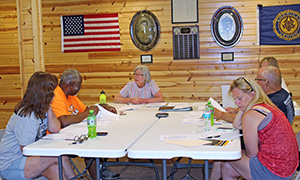 The Whalan City Council received two resignations during the June 14, 2021, council meeting.  One resignation was from a council member and one was on the Zoning Committee.  Additionally, the Whalan representative on the Root River Trail Towns committee is also stepping down.

The agenda was approved, with two additions. The Minutes from the May 10 council meeting and the Treasurer’s Report were both approved as presented.

Wes Harding announced to the council that he will be stepping down as the Whalan representative on the Root River Trail Towns committee.  Harding has held the position for nine years.  The council thanked him for all of his hard work.  Harding commented that there is a need for someone to fill the position.  If anyone is interested please contact Harding.

Dust control has been completed.

There was no report from the Lodging Tax Committee although Peterson reported that she did notify the Lanesboro Chamber of Commerce that the committee would like to make possible changes to the contract.  A meeting will be set up in the near future to discuss the contract.

It was agreed to to reinstate the late fees for past due utility bills. The late fees had been waived during the pandemic.

Adopted at this meeting was a resolution approving a five-year joint powers agreement for prosecution.  The city will have fees for network connection.   Manion O’Koren Law Firm will represent the City of Whalan for non-felony cases.

The agreement with the DNR for 2021 was approved.

Items from the Walking Tour were tabled until the July 2021 meeting.

The council approved a new contract with MiEnergy.  MiEnergy has offered an EV Charging Station to the city at no charge if the city would like one. The city would be responsible for installation costs and maintenance.  The item was tabled until the July 2021 council meeting.

Both Chapter 70 and Chapter 72 under Title 7 of the Ordinance Book were accepted.

The AED Cabinet in the City Hall has been updated with supplies.  The council appreciates Deane Benson’s time in updating the cabinet.

Two AED cabinets will be purchased, one for Aroma Pie Shoppe and one for Cedar Valley Resort, if they would like to have a cabinet for the AEDs located in their businesses.

A request for a utility account adjustment for a past due amount was denied.

Peterson noted that work on the 2022 budget will begin soon and asked council members to be thinking of items that will need to be included in the budget.

Peterson notified the council, for informational purposes only, that MiEnergy will be rebuilding a power line on Everyday Road.  The project will be completed by the end of 2022.

The next regularly scheduled Whalan City Council meeting will be held on July 12 at 5 p.m. at the Whalan City Hall.  For further information visit the City of Whalan website at www.cityofwhalan.weebly.com or call the Whalan City Office at (507) 467-2212.