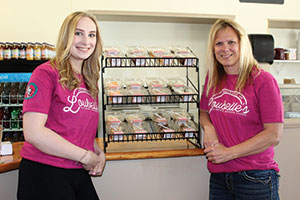 Local residents and visitors alike will be pleased to stop in to a new business opening in Lanesboro, Minn.  After all, we all scream for ice cream!

Kim Berekvam, owner of the building, which was most recently leased by Chelsey Clausen to run her business The Bite, and was formerly home to Berekvam’s own business Gil-B’s, was recently faced with a decision.

“Chelsey was leasing it and then she bought a building in Harmony that suits her needs – it was bigger, so then I did have it for sale for a couple months,” states Berekvam.

She did have one person from Texas that seemed to be a potential buyer, but then his situation changed and he decided to stay in Texas and not purchase the building. She also received a few curiosity calls, but no real serious interest.

“I didn’t want to lease it again, I knew that it was either sell or open it up,” she comments.

After talking to friends and family, who said they would be interested in working for Berekvam, the idea of opening up snowballed.

“It was getting to be March, and I thought, ok, it’s just not enough time to probably try to  sell it to have it open before summer.  I thought it would probably  be best for the community to have it open so that we could provide the service, instead of having it sit empty for another year,” notes Berekvam.

“The idea came to still do the Chocolate Shoppe Ice Cream, because that was a huge seller (for Chelsey). So I got a bigger cooler so that we can serve 16 flavors of ice cream,” says Berekvam.

With Chocolate Shoppe Brand, you are only allowed to have one per town, and Chelsey was very successful with the brand. Berekvam knew she wanted to keep that brand in town.

Then came the time to choose a name for her new business, which was not an easy decision to make, but after stressing about it for awhile, suddenly it came to her.

“Loubelle is a nickname my sister (Karla) gave me when I was a little girl.  She started calling me Loubelle because she said I had this wild, curly brown hair.  As we got older that kind of subsided, I didn’t really hear it much, and then when she moved to Lanesboro, she started calling me it again,” says Berekvam.

“I thought about the Chocolate Shoppe brand… and the cow licking the ice cream cone and I thought, you know, that cow could be Loubelle,” states Berekvam.

“So it kind of has two stories.  People that might not take the time to ask might correlate Loubelle with the cow, or if they ask, then it’s really my nickname that my sister had given me,” notes Berekvam.

“Nobody really calls me that aside from my sister,” adds Berekvam, so it does have a special meaning to her.

Berekvam’s daughter, Emily Reimann, who is 20 years old, will be the manager of Loubelle’s Ice Cream & Sandwich Shoppe, as Berekvam has other irons in the fire that need her attention – look for more information on that in an upcoming edition of the Fillmore County Journal.

Reimann has over five years experience in the restaurant field, not only having worked in her mom’s former business, but also at restaurants outside of Lanesboro.

She has been working full-time as a CNA at the Chosen Valley Care Center in Chatfield, Minn. but answered her mom’s call for help with the restaurant, and is excited about Loubelle’s opening and her new responsibilities.

“I am also going to be working on-call at the care center,” notes Reimann, which no doubt the residents there are happy to hear.  She is also considering going to college for nursing in the fall but will help run the restaurant until then.

They will also have sandwiches and paninis, both hot and cold, and plan to offer soup during the cooler months of the year ,as they hope to be open year-round.  There will be daily specials to switch things up, possibly offering sandwiches not on the menu.

Loubelle’s will have Valley Fudge and Candy from Coon Valley, Wis.  “It is the best,” states Berekvam.  “They make it homemade in a commercial kitchen and they ship all over the United States. I am just really excited to have their products,” she says.

Berekvam has moved all of the prep area for sandwiches and paninis into the kitchen instead of in the front area where is was located in the past.  The front area will focus on the ice cream and fudge.

“I think this little shop is such a cute little place to  have as an ice cream shoppe.  We have the right set-up for it and so I really thought that it would be fitting to keep the ice cream here and not lose the Chocolate Shoppe brand,” notes Berekvam.

There are a couple of big differences from what was on the menu in the past, as the deep fryer is gone and there will be no burgers.

“That was a decision that I felt like I really needed to make – that I don’t have to feel like I have to do it all like I did in the past with the pizza and the burgers and the fries, etc. – I needed to keep it simple,” explains Berekvam.

“We are not doing pizza right now but that is something we could possibly add in the future,” she adds, depending on circumstances.

They have done some sprucing up of the interior with fresh paint and new decor.  Berekvam has also updated some equipment but other than that, “it was pretty much turn-key, it really was ready to go for the most part.”

Look for a Grand Opening sometime in the future once they work out any kinks that arise.  “We are going to do a soft opening for right now and then probably once we really get up swinging and we feel comfortable with what we are doing we will do a Grand Opening,” explains Berekvam.

Berekvam currently has 12 employees, which are mostly high school students, other than a couple of adults. “I am super-excited.  I think we have just a great crew,” she notes.

Berekvam is thankful for all of the support that she has received over the years, which came from every direction.  “I bought the building in 1997, so I’ve had it for 24 years.  I have been very lucky that I have had the support of a lot of friends and family along the way,” she states.

Loubelle’s Ice Cream & Sandwich Shoppe is located at 111 Parkway Ave. N. in Lanesboro.  Business hours are 11 a.m. – 8 p.m.  seven days a week.  Although the website is not up and running yet, more information can be found on their facebook page at facebook.com/Loubelles-Ice-Cream-Sandwich-Shoppe or by calling (507) 467-2200.