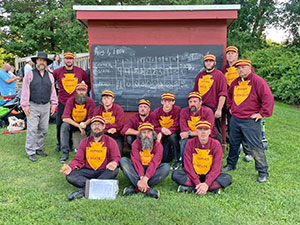 The Fillmore Fungis are a bunch of guys ranging in age from 74 to 16 who like to have fun playing vintage base ball – hence the name Fungis (fun guys). The Fungis play according to the vintage rules of 1860, the first real set of rules written down.

The biggest difference between their base ball and our current baseball is that no gloves were used until the 1870s. At that time, because pitchers and catchers were getting injured by the faster and faster pitches, they literally bandaged their hands. Someone covered their bandages with a buckskin glove and soon gloves came into use.

There were no balls or strikes; in 1860 a batter could stand and wait for a good pitch as long as he wanted. The goal of pitching the ball to a batter was to put the ball into play so the fielders could put the batter out. The third difference in vintage base ball is that if the batted ball bounces once, it can still be caught for an out.

The equipment is different from today’s in several ways. The only rule for the ball was that it had to be no larger than 9.5” in circumference and no more than five ounces. The game was played by Civil War soldiers in their free time and brought back to their home states after the war. The soldiers would carve out a piece of the heel of their boots (India core rubber) and wrap that with string and cover with a single piece of leather stitched all around the ball; this was called a lemon peel ball. Steve Gorder of Rushford now makes the team balls using a rubber band ball for the core.

Bats in the 1860s had to be no larger than 2½” thick, but could be any length. All the Fillmore Fungis have their own bats; one has a collection of 14 bats. Phoenix Bats of Columbus, Ohio manufactures bats using old, original patterns for today’s vintage ball players. The bats are thicker in the handle than standard baseball bats.

Originally no protective gear was worn by the catcher; it wasn’t necessary as the pitchers lobbed the ball in underhanded. Overhand pitching didn’t begin until the 1880s.

In 1864 and 1865 pitchers began throwing faster; stealing at that time was too easy. Pitchers also started throwing outside to the catcher. After a warning, only three more balls were thrown before the batter was walked. When a batter was walked, all of the players on base advanced a base.

Base ball was originally a gentleman’s game played for exercise. It became a young person’s game by the 1860s as play became faster, more running was added, and the game turned more competitive.

The Fillmore Fungis replicated the old uniforms of the day, choosing maroon and gold to represent the gopher state, Minnesota; the colors resonate with team member Steve Gorder who wore maroon and gold at Peterson High School. The shields on the Fungis uniforms reverses with fungi on one side and Gopher State on the other. The Gopher State shield is used when the team plays out of state.

The Fungis just returned from the Doc Adams Vintage Base Ball Festival held at Old Bethpage Village Restoration in New York. Doc Adams is considered the father of baseball; he was the actual codifier of the original set of rules, Currently, there is a push to get him inducted into the baseball hall of fame.

The Fungis were the first team from west of the Mississippi to be invited to play at the Doc Adams. Games following the rules of different time periods ranging from the 1860s to the 1880s with that new-fangled overhand pitching and catcher gear were played at the festival. The Fungis played a series of five games according to the 1864 rules. They lost the first four games as they learned the rules, but came away with a 33-10 win for the final game.

Jeff Boehmer, captain of the Fungis, found playing teams that have been in existence for a long time to be the highlight of the festival. The Brooklyn Atlantics (since 1855) and the New York Mutuals (since 1856) taught the Fungis a lot as they played with them.

The Fungis will travel to Ohio Labor Day weekend to play the Ohio Village Muffins who are celebrating their 40th year as a team this year. (Muffin meant not very talented in the 1800s.) The Muffins were instrumental in establishing the Rochester Roosters team in the late 1990s. While there, the Fungis will play six games; four fields will be used simultaneously as 30 teams from around the country play each other.

The Fungis played the La Crescent Apple Jacks at DreamAcres this past June during their pizza night. The Apple Jacks were short of team members, but a few Fungis switched teams so they could play. They’ll be playing there again next June.

The Fungis hosted the Apple Jacks and the Milwaukee Grays at Fungi Fest in Rushford on August 7. The rainy weekend definitely dampened the field, but the teams managed to get some games in as they played in the mud. (The Fungis are working with the school to reseed the field.)

The season is drawing to a close; in addition to the Labor Day trip to Ohio, the Fungis will be playing at Highland Prairie in September and La Crescent in late September. Soon they will be working on their schedule for next year.

The Fillmore Fungis would like to invite you to form a team and get on their schedule. They’d love to play with you and teach you vintage base ball, which they feel is more fun than standard softball. They encourage all groups – softball teams, fire departments, Little League teams, men and women – to reach out to them. You can contact them via their Facebook page, the Fillmore Fungis, or email them at fillmorefungi@gmail.com, or call their partner, The Fillmore County Historical Society, to put you in touch with the team.

Captain Jeff Boehmer emphasized that while they are competitive, the team never turns down someone who wants to play. They stress fun and the educational aspect of playing following the 1860 rules. He added that they enjoy showing off the cool natural areas of Fillmore County as they host teams. The Fillmore Fungis are indeed all about having fun and they invite and encourage you to join them!