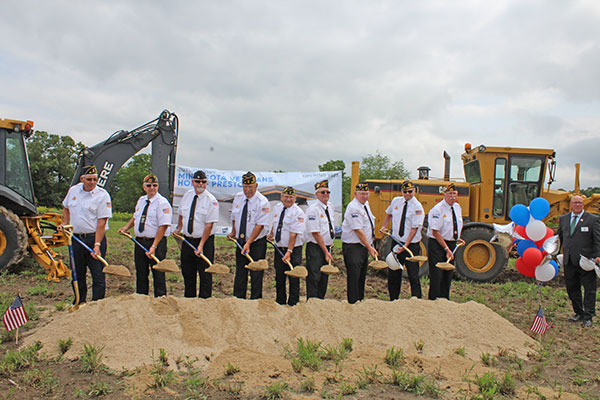 Deputy Commissioner of Veterans Homes Healthcare Douglas Hughes said the “community effort was amazing.” The seeds of this dream of a veterans home in Fillmore County were planted about eight years ago. The history of Veterans Homes in Minnesota goes back to 1887. Five veterans homes are currently in operation in the state.

Community members and donors, veterans, committee members, local officials, and state officials came together to celebrate. The dream will become a reality. Preston mayor Kurt Reicks referred to the effort for a veterans home as a dream during a city council meeting several years ago. Sometimes a dream can become reality. There will potentially be a grand opening of this 54 bed veterans home in mid-2023.

The catchment area in southeast Minnesota includes 15 counties where about 33% of Minnesota veterans live. About 23,000 veterans lived in this area that were over age 65 when a “needs study” was conducted about four years ago. Both the construction of the home and the long-term operation of the home will have a significant economic impact on the county and the region.

Pastor Dan Bredberg gave the invocation, “Bless this place as we break ground… a sacred place of healing and hope.”

Governor Tim Walz thanked the federal partners in the Senate and the House. As Preston City Administrator Joe Hoffman explained to me after the progam, everything had to come together for the home to become a reality, from the community and committee effort, local funding and donations, legislators passing funding in the 2018 bonding bill, and finally federal funding in the American Rescue Plan Act 2021.

Walz had visited the Minnesota State Veterans Cemetery – Preston just before the celebration and said it is as well kept as Arlington. He noted as a veteran walks into the cemetery, differences disappear. “We have our political differences but when it comes to the care of our veterans there is no daylight between us. This will not be just another long term care facility.” He thanked those who had donated to this project (local investments well over $1 million), for their investment in the community. Fillmore County will be the only county in the state with both a veterans cemetery and a veterans home. Walz concluded his remarks saying we will care for those who left for eternity and for those who are still here.

Larry Herke, commissioner of Minnesota Department of Veterans Affairs, explained his staff has been involved since 2018. He said they will need to recruit 100-120 people to work at the facility. Hiring for the new home will begin in mid-2022. Resident applications will be accepted several months prior to opening (date to be determined). For more information about the new home and to receive updates about employment opportunities, visit MinnesotaVeteran.org/FutureHomes or email NewHomesJobs@state.mn.us To learn more about job opportunities visit MinnesotaVeteran.org/careers.

Representative Jim Hagedorn called building this home is one of the most important things we can do for our veterans. Everyone, including members of the community, have gone above and beyond.

Senator Jeremy Miller called the project “an example of a collaboration effort between local community, state, and federal government.” He credited the effort at the local level as the reason why Preston will be the home of a state veterans cemetery and a state veterans home.

State Representative Greg Davids recalled how both Preston and Spring Valley had proposed the veterans home to be located in their city. The Fillmore County Board was asked to make the decision; the vote was 3-2 for Preston. After which, the board by unanimous ballot supported the Preston location. Davids thanked the Spring Valley support for making it a better project, noting it was a big deal. He called the Fillmore County Board the best in Minnesota. He thanked both Governors Dayton and Walz, Hagedorn, Senators Tina Smith and Amy Klobuchar, and current and former legislators of both parties. “We leave party affiliation at the door and do what is best for our veterans,” shared Davids.

Ron Scheevel, co-chair with Don Gildner on the veterans home committee, called all the work toward the home a powerful example of folks coming together. He thanked the committee members, and then EDA director Cathy Enerson. Scheevel recalled that while stationed where there was armed conflict he promised himself if he got out of there he would do something to help others. This was in keeping with that promise. “My hero is any person who takes an oath, puts on the uniform and serves honorably,” Scheevel said, “I am so honored to be a small part of this.”

City Administrator Hoffman was recognized for all of his efforts. Then it was noted that seven-year-old Carter Keim raised $2,500 with farm fresh egg sales (Chester’s Butt Nuggets). Christina and Anton Welke raised $4,500 from a baseball tournament they organized. Numerous individual donors contributed, with all of the donations received important for this project to go forward.

The program was followed by the ceremonial groundbreaking festivities with the golden shovels.