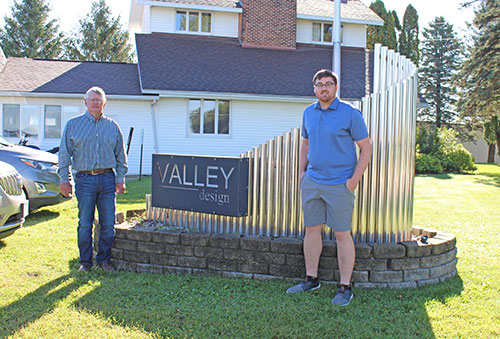 It started in 1986 as a small powder coating business run out of the old Fountain Body Shop building with less than 3,500 square feet of space. Thirty-five years later, Valley Design still operates out of Fountain, but has grown to a 100,000 square foot facility across the road from where it originally sat, that serves the entire United States into Canada. “Most people don’t realize how big we are and they drive by here every day,” owner and CEO Butch Isensee commented.

Butch had been working at Tuohy Furniture in Chatfield for about 10 years when he saw a market he could tap into. At the time, he was in charge of engineering at Tuohy and learned about powder coating for furniture, which was still a fairly new thing at the time. One thing that stood out to him about the process was how green it was compared to other coating methods. “There are very little VOCs,” he explained, adding that the lack of hazardous waste to deal with was a draw for him. “I thought, hey this is pretty neat.” Together with Tim Bremseth, he started a custom powder coating shop, one of less than 10 in the entire state of Minnesota at the time. They ran it as co-owners until Tim retired in 2013.

By the late ‘80s, Valley Design had begun metal fabrication for custom furniture components. By 2000, only 60% of their business still entailed powder coating and now, in 2021, 97% of what Valley Design does is furniture components. “We make custom parts for OEMs (Original Equipment Manufacture),” Butch’s son Luke Isensee explained. That means that they don’t generally sell fully made furniture, but rather the parts for it so their clients can create a custom product. Butch commented that when he first started the business, powder coating was usually outsourced, but over the years, many manufacturers began to do it themselves. In addition, by 2000, the number of custom powder coaters in Minnesota had jumped from less than 10 to over 300. The competition was just too strong to keep doing that alone.

Luke, who works with his father as the VP of sales at Valley Design and hopes to someday step into his father’s shoes, has been helping out at the business since he was a kid. He started out shredding papers for $5 a day plus snacks. When he was a teenager, he began working on the paint line and then moved into other roles on the production floor. For the last three years, he has been on the sales team.

Valley Design makes a lot of furniture components for offices, colleges, and K-12 schools, including Fillmore Central. Several years ago, a grant enabled Fillmore Central to purchase some student standing desks for the high school. Valley Design made the bases and Tuohy Furniture made the desk tops for those desks. Some of the unique things Valley Design offers are pneumatic table and desk legs as well as electric adjustable ones. One of their popular niche items is a pneumatic teacher lectern and they hold several patents on different furniture pieces. “Niche areas are important,” Butch said. Luke agreed. “We’re known in our industry as kind of that niche problem-solver,” he explained. “That’s our sweet spot.” A lot of their business comes from Michigan and Southern Indiana where multiple furniture companies are based. Valley Design offers a standard catalog with modifications available and custom work for larger manufacturers.

Currently Valley Design has about 75 employees. “Right now we could use 10 more people,” Butch said. COVID has created a worker shortage as it pushed a lot of people who were close to retirement into taking that step. It also created a lot of uncertainty in the office furniture businesses such as Valley Design as companies are changing how their space is being used and more people are working from home. But not all changes are bad. Luke believes that with disruptions to the global supply, domestic products will become more of a commodity.

When Butch started Valley Design with Bremseth in 1986, he could never have imagined how their little powder coating shop would grow and change into the successful furniture component business it is now. “You just keep driving down the road and you’re not really sure where you’re going to end up,” he commented. Luke noted that things are changing at a lot faster pace now, especially from the technology side. “With tech changing so fast, it affects the office industry,” he explained. “You just have to pay attention and see how that’s going to affect your business.”

As of now, Butch doesn’t have any big plans for celebrating Valley Design’s 35th anniversary. The official date was on September 1, but that fell in the middle of their busiest season which runs from May to October. At that time, construction is usually being wrapped up and schools are planning for their upcoming school year which means a bigger demand for office and school furniture.

Butch, who lives in Chatfield, is proud to run his business in Fillmore County and Luke agreed. “The people from Fillmore County that have come to work for us; we really appreciate them. Good values, hard-working, and loyal.” One of their employees, Matt Bradt, has been with Valley Design for 34 years and has no plans to retire yet. Mona Himli, another employee who actually retired on September 9, had 31 years under her belt. “I think the best thing about working for Valley is that I get to work for friends,” she said.