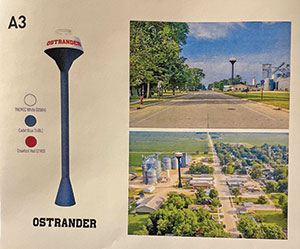 The Ostrander City Council met in regular session on May 4, with all members present (Stephanie Start, Dan Hellerud, DJ Start, Vernon Thompson, Mayor Pam Kunert), and city clerk Wendy Brincks.  The council discussed whether or not to hold Uff Da Days this year, while the city is still in the midst of a large infrastructure project. Brincks stated that “it’ll be a mess” if the city holds the event while streets are being worked on.  The council agreed to wait and hold a big celebration in 2022 to showcase the city’s improvements.

Jeremy Runkle asked if the city will offer summer softball this year.  DJ Start replied, “As far as I know,” and he said the first games will likely be held on the first Monday in June.  Brincks added that she has hand sanitizer stations that the city will position where needed at the softball field.  Runkle said he will get the concession stand ready for the start of the softball season.

The council discussed whether or not to leave the road through the park at the end of this year’s construction project.  Brincks pointed out that the road runs directly in front of the bathrooms at the park.  She said if the city wishes to keep the road, it will have rock added to it.  Runkle mentioned that if the road remains, it would incur additional costs for the city to maintain it year-round, and he added, “I don’t like the location, and it’s just a way for drunks to sneak in and out of town.”  Council members shared concerns about safety of any children playing near the road.  The council voted to have the road eliminated and re-seeded after the construction project is done.

Roger Tangen addressed the council, on behalf of Trinity Lutheran Church.  He discussed the planned repaving of the parking lot, as was discussed at the October 2020 meeting.  He said since the church’s budget is limited, “We’re not looking for city help, but we’re looking for ways that we can do what we have to do to be compatible with the street that’s going to be replaced.”

Wendy Brincks replied, “So, Minnesota Street north and south, we will do nothing.  And South Street, we will actually only do a portion of South Street.  So, the part that’s gravel will be fixed.  The part that’s still pavement we are not touching… It will affect you none whatsoever.”  Tangen thanked the city for clearing that up.

The council discussed the new water tower, which is expected to be erected in early June.  Brincks shared the color scheme options that the city can choose from.  She also said since “Ostrander” is a long word, there will only be room to have it on one face of the new water tower, and she said the city needs to decide which direction the “Ostrander” name will face.  After discussion, the council settled on a “red/white/blue” color scheme, with the name facing east.  The tank will be white, with “Ostrander” in red lettering, and the post will be solid blue.  Brincks added, “They should have the old water tower down by the end of August, maybe September.”

Regarding the upcoming citywide cleanup set for May 15, it was mentioned that the location has been changed to the west side of the Trinity Lutheran Church parking area on Minnesota Street. Brincks stated that, “Anybody that would like to help, it’s 8 to noon.”

The council’s next regular meeting will be Tuesday, June 1, at 6:30 p.m., in the community center.  The public is welcome at all meetings, other than special closed meetings.