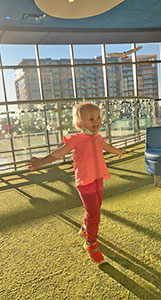 It’s every parent’s worst nightmare. “She’s our everything,” Brandon Stackhouse said about his two-year-old daughter Bailee. “To be told she has cancer, it’s been devastating. I wouldn’t wish this on anybody.”

Brandon and his wife Sara live in Spring Valley with Bailee. In January, they received a phone call from their daycare provider telling them that she had noticed blood in Bailee’s urine. They took her to the doctor that day and were told that it was probably a UTI or possibly a passed kidney stone. The doctor decided to perform an ultrasound of Bailee’s kidney and saw a large mass on her kidney so the next step was to biopsy the mass to determine what it was. The results were devastating. Bailee was diagnosed with a Wilms’ tumor on her kidney. The next week, she underwent a CT and MRI which showed that the cancer had spread to her lymph nodes and lungs, making it a stage IV cancer.

A Wilms’ tumor is a rare kidney cancer which affects about 1 in every 10,000 children, according to St. Jude Children’s Research Hospital. Approximately 500-600 cases are diagnosed each year, usually in children under the age of five. Most of the time, no symptoms appear to indicate something is wrong until the tumor has grown fairly large. That was the case with Bailee. “She wasn’t giving us any reason to believe she had cancer, so we were really surprised,” Sara explained. “Thank God the daycare lady recognized the blood in the urine,” Brandon added. Bailee’s tumor was too large to remove right away so her treatment began with six weeks of chemotherapy to try to shrink it down to where the doctors could operate. The chemo did its job and on March 8, Bailee underwent a six-hour long surgery, during which surgeons removed the tumor along with her kidney, adrenal glands, and some lymph nodes. The surgery went well. “The surgeons were very pleased with how it turned out because they were able to remove the kidney and tumor without any spillage,” Brandon said. Bailee spent six days in the hospital recovering from her surgery and then was able to go home for a while before she began a regimen of aggressive in-patient chemotherapy and radiation therapy.

As of now, Bailee has been hospitalized four times. Her first hospitalization was unexpected and occurred after her biopsy when the tumor didn’t clot properly at the needle site. Instead, it bled into itself which caused it to grow, throwing off her blood counts. She spent six days in the hospital for that in January. Because the tumor was putting pressure on her stomach and some of her arteries, Bailee suffered from high blood pressure, discomfort in her abdomen, and wasn’t able to eat much. She went back in the hospital for three days to have a nasogastric, or NG tube placed, which is a feeding tube that goes from the nose to the stomach, to help her get the nutrition she needed. Normally, NG tubes can be placed out-patient,

but because Bailee’s tumor was so large, it had to be done surgically instead. The third hospitalization was for her six-hour long surgery to remove the tumor, during which a G Tube or gastronomy tube was also surgically placed directly into her stomach, replacing the NG tube. Bailee recently completed her fourth hospitalization, a six-day stay for in-patient chemo and proton beam radiation.

Despite the treatment causing nausea and making Bailee lose her appetite, Sara and Brandon saw a difference in her during her latest stint in the hospital. Removing the tumor lessened some of Bailee’s discomfort and pain. “She was more like a two-year-old this time,” Brandon said.

Bailee will continue to receive a combination of chemotherapy and radiation therapy for a minimum of 25 weeks. She will need to be hospitalized for each round of treatment and could end up in the hospital between them as well if she develops complications or starts to run a fever. The treatment suppresses her immune system and so Brandon and Sara have had to be extremely cautious of germs, restricting visits from family and friends and asking that gifts and deliveries be dropped off at their doorstep. They are especially concerned about Bailee being exposed to COVID. Despite not being able to see people, the Stackhouses feel and are grateful for the support and prayers they received. “We’ve had wonderful support from family, friends, people who we haven’t spoken to in over 10 years,” Brandon said. Both his and Sara’s employers and coworkers have been supportive as well. “One of us always has to be with Bailee, so we’re missing a lot of work,” Brandon said, explaining that Sara, a registered nurse at Mayo Clinic, hasn’t been able to work since the diagnosis. As concerned as they are about germs, Brandon is still working at his job at POET as much as possible and is thankful that the company has been very gracious with letting him have time off for Bailee’s care. “The bills don’t stop coming,” he said.

Anyone interested in helping the Stackhouse family in their fight against Bailee’s cancer can learn more and donate at gofundme.com/f/bailees-fight-against-cancer.