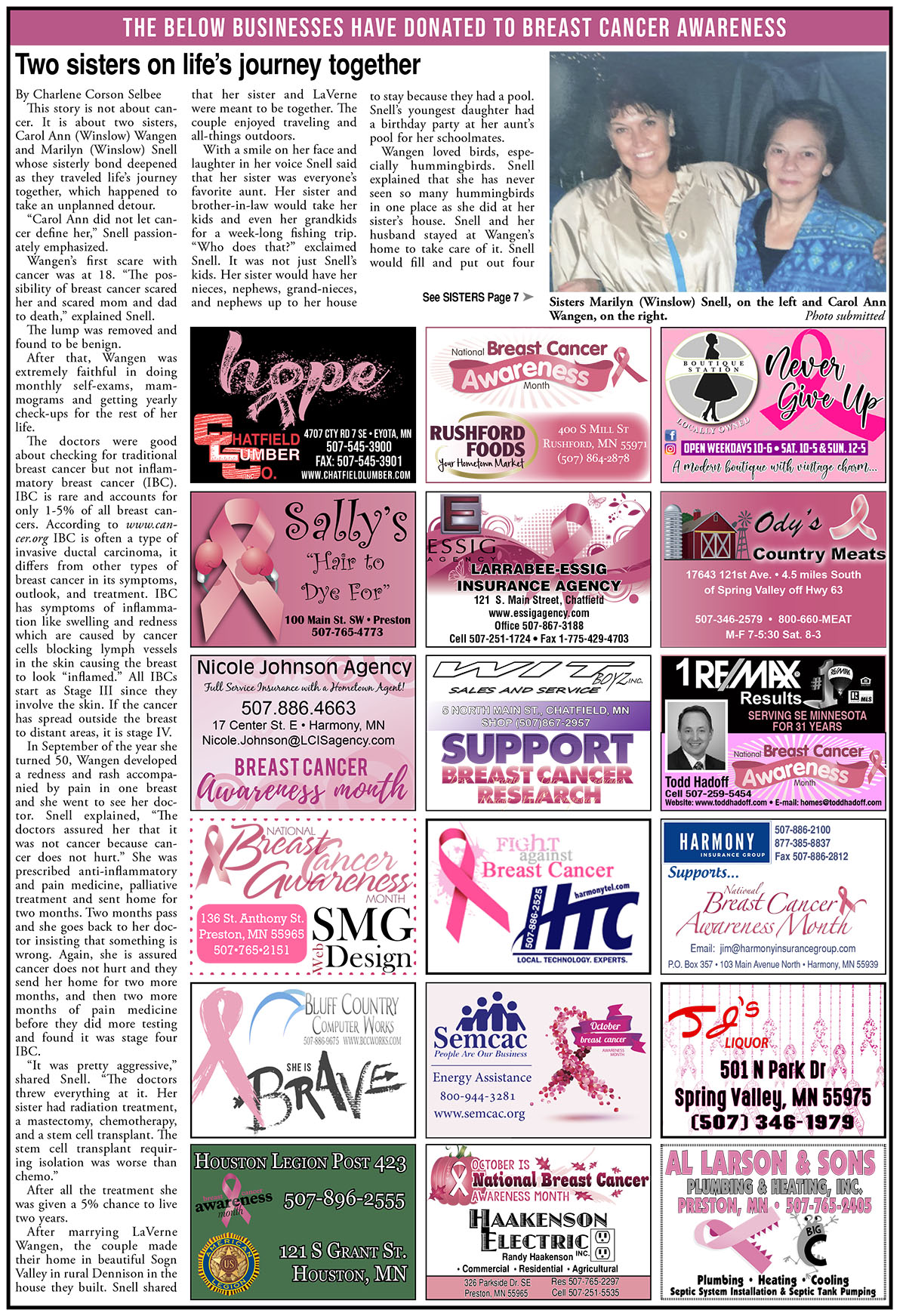 This story is not about cancer. It is about two sisters, Carol Ann (Winslow) Wangen and Marilyn (Winslow) Snell whose sisterly bond deepened as they traveled life’s journey together, which happened to take an unplanned detour.

Wangen’s first scare with cancer was at 18. “The possibility of breast cancer scared her and scared mom and dad to death,” explained Snell.

The lump was removed and found to be benign.

After that, Wangen was extremely faithful in doing monthly self-exams, mammograms and getting yearly check-ups for the rest of her life.

The doctors were good about checking for traditional breast cancer but not inflammatory breast cancer (IBC). IBC is rare and accounts for only 1-5% of all breast cancers. According to www.cancer.org IBC is often a type of invasive ductal carcinoma, it differs from other types of breast cancer in its symptoms, outlook, and treatment. IBC has symptoms of inflammation like swelling and redness which are caused by cancer cells blocking lymph vessels in the skin causing the breast to look “inflamed.” All IBCs start as Stage III since they involve the skin. If the cancer has spread outside the breast to distant areas, it is stage IV.

In September of the year she turned 50, Wangen developed a redness and rash accompanied by pain in one breast and she went to see her doctor. Snell explained, “The doctors assured her that it was not cancer because cancer does not hurt.” She was prescribed anti-inflammatory and pain medicine, palliative treatment and sent home for two months. Two months pass and she goes back to her doctor insisting that something is wrong. Again, she is assured cancer does not hurt and they send her home for two more months, and then two more months of pain medicine before they did more testing and found it was stage four IBC.

After all the treatment she was given a 5% chance to live two years.

After marrying LaVerne Wangen, the couple made their home in beautiful Sogn Valley in rural Dennison in the house they built. Snell shared that her sister and LaVerne were meant to be together. The couple enjoyed traveling and all-things outdoors.

With a smile on her face and laughter in her voice Snell said that her sister was everyone’s favorite aunt. Her sister and brother-in-law would take her kids and even her grandkids for a week-long fishing trip. “Who does that?” exclaimed Snell. It was not just Snell’s kids. Her sister would have her nieces, nephews, grand-nieces, and nephews up to her house to stay because they had a pool. Snell’s youngest daughter had a birthday party at her aunt’s pool for her schoolmates.

Wangen loved birds, especially hummingbirds. Snell explained that she has never seen so many hummingbirds in one place as she did at her sister’s house. Snell and her husband stayed at Wangen’s home to take care of it. Snell would fill and put out four hummingbird feeders every day and they were gone by the end of the day, every day.

Snell believes that the turning point for Wangen was losing her husband in 2005. The stress from having to make the decision to disconnect life support, and grief from his passing was more than she could handle.

Wangen endured monthly infusion for years. It was not a cure, but it kept the cancer at bay. In 2009, cancer was found in her liver and required the same treatment.

Without her husband at her side, she just could not endure going through the regimen again and said “no more.” It was difficult for Snell to accept but she understood and supported her sister, referring to herself as the “bulldog.”

Wangen had a strong family support system. Her husband stayed with her during the stem cell replacement treatment which requires isolation. Wangen asked Snell to coordinate her care and arrange for hospice. When Snell had to work, other family members took turns staying with Wangen. Snell said, “What goes around comes around.” Wangen had done a lot for everyone else and now it was time to give back and everybody stepped up and did their part.

Snell emphasized, “Doctors are human, and they may not have all the answers 100% of the time. You live in your body, and no one knows your body better than you do.  You are in charge of your healing.  Use all the tools that medicine has to offer to help you heal. Advocate for yourself and what you know is right for you.”

Wangen was determined to not let cancer win and she did her due diligence. She did everything she had to do.

Wangen died in November 2009 at the young age of 62. In her last weeks, Wangen and her sister spent the time talking about many things including what sign Snell would like to see confirming that she had passed over. Snell thought and thought and finally said a hummingbird.

At the graveside services, the funeral director walked up to Snell and she held out her hand, and there laying in her palm was a glass hummingbird figurine. The director explained that she did not know what to make of it, but when she went to fuel up the hearse for the drive to the cemetery, she found it on the ground. At that moment Snell knew that her sister had peacefully passed over.