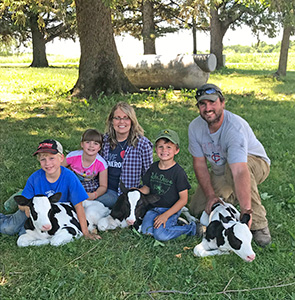 Josh and Steph Dahl should have played the lottery Wednesday, June 16; that day they had a set of triplets, two sets of twins, and two single calves all born in less than five hours on their farm, Dead End Dairy. While twin calves are relatively common with a set born every 29 births, triplets occur much more rarely – once in every 105,000 births according to the internet. With all the multiple births that night, the Dahls hit the jackpot!

Steph knew that when Josh called her around seven to come down to the dry cow barn that a calf was on the way, so she hurried to the barn. The mom-to-be was trying to go near calves that had already been born, but needed to settle down for her own delivery. The first calf came easily so Josh checked to see if there was another calf, and sure enough there was! Josh joked, “I’d better check and see if there’s another one!” To his surprise there was a third calf! When asked if he then checked for a fourth, Josh said he had indeed actually checked!

The triplets were a complete surprise; the Dahls had no idea that mom Betje was having multiple calves. All three calves were healthy with birth weights of 51.6, 61, and 64.8 pounds. (Single birth calves average between 80 and 100 pounds at birth.) The calves, two female and one male, were born a couple weeks early. This was the fourth lactation for Betje.  Previous births had been single, but sometimes there is a tendency for cows to repeat multiple births. Josh observed that a lot of twins had been born on the farm this year, but has no idea why this has been happening.

The triplets were taken immediately to the calf barn, while Betje was taken to the milking barn. The calf barn was built five years ago and provides shade and ventilation using a fan and perforated fabric tube system. Even on a humid, 90 degree day, the barn is cool and comfortable for the calves. For their first feeding the triplets received two bottles of colostrum; they continued to receive colostrum  (first milk produced after delivery) for the first four feedings.

The two females are nearly identical while the male has more black on his coat. The triplets will probably have blood tests to see if the females are free martins. In twin births of a male and female, the female is often a free martin meaning that she would not be able to bear calves and thus produce milk.

The farm had a bull up until about six months ago. Currently, Josh takes care of the artificial insemination using semen from ABS.

When asked how many cows they milk, Josh replied around 190. Cashton, his eight-year-old son piped in, “It’s a 192!” Cashton, his sister Jaxie (also eight) and his brother Bricker (age five) all enjoy helping around the farm. Jonathan Dahl, Josh’s brother, is in partnership with Josh on the farm. In total they have around 450 head.

Although there are a lot of cattle at the dairy, each cow is given a name. Each cow has two “earrings” – one has the cow’s name and birthdate; the other has its barn number. Each cow also has an ID tag. When Steph first came to the farm, the cows had green number tags. She quickly got that switched to purple and pink, declaring, “They’re girls!”

The triplets have yet to be named; since their mom’s name is Betje, the Dahls plan to name them with “B” names. A niece originally named Betje, which is a Dutch name. The Dahls have been using a theme of city and state names right now; in the past they’d used a candy theme. We’ll have to wait and see what names the triplets receive!

Last winter, a calf was born five weeks early during the cold snap. Cashton, Jaxie, and Bricker cajoled their dad (with some prompting from mom Steph) to keep the calf in the house. For a couple weeks, the calf lived in the kitchen, walking under the kitchen table, and enjoying the attention from the kids. Steph commented, “It really wasn’t much different than having a dog in the house!”

Obviously, the entire family enjoys farm living and their animals. Dead End Dairy was the perfect place for those new lucky little triplets to be born!