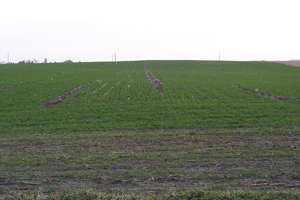 ST. PAUL, MN, January 26, 2022 — Sulfur (S) might be considered a secondary nutrient, but it is essential for crop production. Historically, sulfur fertilizer was recommended on low soil organic matter soils and coarse-textured sandy soils, according to Jeff Vetsch, a soil scientist at the University of Minnesota Southern Research and Outreach Center in Waseca.

Then in a liming study that ran from 1999 to 2006, Vetsch started to recognize slight corn yield increases when S had been applied on a soil where they didn’t expect a response. Further studies showed even greater yield increases and a study in 2010 opened their eyes to what a sulfur response on heavy, high organic soils could look like.

“What changed that we needed sulfur on these higher organic matter, medium- and fine-textured soils?” asked Vetsch. Researchers threw out several potential causes; perhaps it was higher yielding corn or perhaps fewer sulfur impurities in phosphorus fertilizers, but the cause that is most likely is the role of reduced sulfur emissions from power plants.

Sulfur dioxide emissions have decreased from a level of 17 million tons per year in 1980 to less than 1 million tons in 2020. As a result, atmospheric deposition of sulfur now is relatively small and not a significant source for crops.

Dr. Dan Kaiser, University of Minnesota Extension nutrient management specialist, focuses his research today on sulfur fertilizer sources, application rates and timing. Due to their responses, corn and alfalfa are the two crops that have shown the most benefit from sulfur fertilizer on fine-textured soils. As a result, fertilizer guidelines have been updated.

“Sulfur fertilization hasn’t been a one-size-fits-all strategy. There are a lot of options and it’s trying to tailor fit those options with your crop rotation and tillage scheme,” states Kaiser.

For more information on sulfur recommendations from the University of Minnesota Extension, visit extension.umn.edu/nutrient-management.

For more news from U of M Extension, visit www.extension.umn.edu/news or contact Extension Communications at extdigest@umn.edu. University of Minnesota Extension is an equal opportunity educator and employer.