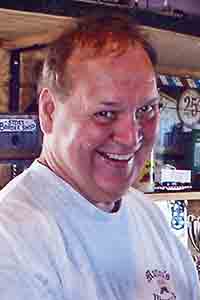 Steven Wendt passed away on Wednesday, April 28, 2021, after a tough and unexpected cancer diagnosis just a few weeks ago. Steve was born on October 26, 1944, to Reuben and Dorothy (Sanden) Wendt. He grew up on his family’s farm in Southeast Minnesota and graduated from Preston High School.

Steve was a barber in South Minneapolis and Bloomington for over 50 years, and many of his customers became close friends. He often cut the hair of fathers, their sons and grandsons; becoming part of their families along the way. His barber shop, Metro Hair Design, was really a “friend shop” and social club: full of model trains and antiques, coffee and treats, a steady stream of jokes and conversation. The shop was a social hub for the whole office complex, and Steve was affectionately dubbed the “Mayor of Metro Park.”

Steve had a real gift for friendship. Funny and irreverent, he made friends easily, often striking up conversations with strangers. Steve had a unique ability to transform chance encounters into deep friendships. He brought people out of their comfort zones with disarmingly big hugs and long conversations. These friendships were forged over dinners and drinks, through games of golf and bowling and cards, fishing trips and ski vacations. Steve was always ready to say “yes,” always game for a new adventure. He was also connector: introducing people, sharing recommendations, making room at the table. He was many people’s closest friend.

Steve was an enthusiast. He pursued activities with gusto: photography, magic, clowning, biking, skiing, bowling, golf, model trains and more. He always had other ventures — like growing grapes and raspberries for a “country market” at the family farm—and countless projects in the works. Some of these passions even became side jobs. He loved “Fly Over America,” and considered it a personal challenge to have the highest dollar sales on his shift. Mowing grass — which he did for friends and the golf course — was a source of joy, reminding him of days on the farm. And he loved the State Fair, always counting down the days on a chalkboard at the barber shop. He translated this love into a decades-long job running the “Space Tower” ride, relishing the chance to greet fair-goers with: “Step right up, you’ll never have so much fun.”

Steve was an inveterate optimist. He was always looking ahead, to a new sunrise, the next adventure, another game. But, above all, he was kind and generous, always ready to share his positive outlook with others, and give to anyone in need. He kept treats in his pockets for friends’ dogs, and $2 bills on hand to give to children. He genuinely cared about people’s lives and problems, often encouraging others to “hang in there, kiddo.” He always had a wide smile, a kind word, and a ready bear hug. He loved being with people, and even through his short illness, took any chance he could to connect with others. Our “Steve-O” was one-of-a-kind: hard to describe (to people who didn’t get the chance to meet him) but not easily forgotten (by everyone lucky enough to know him).

Steve leaves behind a wide, wonderful circle of friends and family. He is survived by his twin sister Susan Turk, of Wichita Falls, Tex., his brother John Wendt and sister-in-law Ruth Wendt, of Fountain, Minn., as well as many beloved nieces, nephews and their families. He also is survived by two former spouses, Fran (Berland) Scibora and Judy Fancher.

He was preceded in death by his parents, his sister Linda Wilson, and brothers Richard Wendt and Dennis Wendt.

A memorial service to celebrate Steve’s life will be held on Friday, May 28, 2021, at 1 p.m. at Wooddale Church, 6630 Shady Oak Rd, Eden Prairie, Minn. 55344. The service will also be live-streamed and recorded. Steve’s family is also planning a smaller, informal reception at the farm later that weekend. In lieu of flowers, friends and family are organizing a memorial to the Minnesota State Fair Foundation in Steve’s honor.