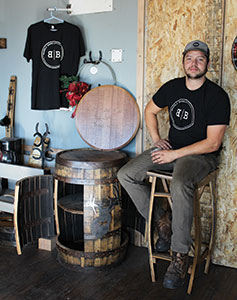 Rustic decor is all the craze nowadays and it is a style type that is considered natural, aged, organic, and maybe even a little rough around the edges. For those hoping to add more rustic charm to their home or to a special event, there is a business in Preston, Minn., that fits the bill.

Baukol’s Barrels is a custom furniture and decor store that specializes in creating whiskey barrel pieces and is owned by Austin Baukol. When asked about the difficulty building something from a whiskey barrel, Baukol said he liked the challenge. “What I say is, you can pretty much make anything you want out of this stuff, it just takes a little extra ingenuity because you’re dealing with a board that isn’t straight in any facet whatsoever.” Describing how it is a different process building with a curved board versus buying something straight, Baukol explains it is a matter of figuring out the angles and how to attach the pieces together. Not afraid of a challenge, Baukol is ready to take on any custom order. “Sometimes you figure it out, sometimes you waste a lot of materials trying to do it, but after awhile you get the hang of it.”

The most popular item built at Baukol’s Barrels is the barrel bar – a whiskey barrel turned into a custom storage unit with a door and interior shelving most widely used for storing alcohol. Apart from the fact that it’s a good place to store liquor, Baukol says it serves another purpose as a conversation piece. “People like to talk about the barrel. If you’re a whisky fanatic at all and you see a barrel you immediately gravitate towards it, to look at what distillery did it come from, the character, the date it was barreled, and all this stuff. Then you open the door up and it’s like ‘Whoa!’ It’s something different from what you’d normally see.” The first time Baukol built a barrel bar it was for a co-worker at Progressive Insurance. Knowing that Baukol enjoyed building things, his co-worker reached out and said, “Hey, I’ve got a barrel, can you make a bar out of it?” Baukol replied, “Yeah, of course I can.” To put this project in perspective, Baukol shared what it currently takes to build one. “When we want to get one done, it takes roughly four to six hours to make a barrel bar from beginning to end. The first one took three months because I was afraid to start. I didn’t have accessto another barrel, this was one he got somewhere specific, and I had no idea what I was doing. It took me three months to pull the trigger on doing the cuts and in the process I didn’t make any money because I spent all the money to buy the tools necessary to make the bar. But after that I was like, ‘This is awesome!’” Inspired by building a barrel bar, Baukol made the decision to quit his job and start his own business. He officially started Baukol’s Barrels in 2017, and opened the Preston storefront one year ago. It started off with one bar and he has built well over 100 since then. 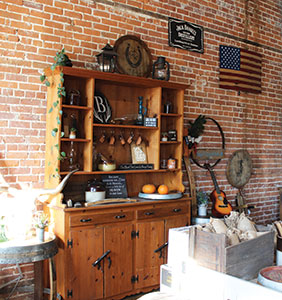 Most of the barrels Baukol uses are Jim Beam barrels from Kentucky. In addition to making whiskey barrel furniture, Baukol’s Barrels offers options for barrel rentals and barrel sales for special events, and it is especially popular at weddings. Unfortunately with the pandemic this year, the wedding season was not happening and barrel sales disappeared. Only last year, Baukol went from selling or going through almost 300 barrels to about 100 this year. There is a bright side. “Fortunately for me, with people being stuck at home, looking at a space that has nothing in it people are going, ‘We should put something there,’ and my barrel bar sales has increased, which has helped a lot.”

Looking towards the future, Baukol is waiting for a shipment of 288 barrels to arrive next week and he’ll put them into storage. “Next year I hope that the wedding season will come back, and more barrels will be sold in that facet. I needed barrels because I was starting to run out, but it’s also a bit of a gamble getting that large of a truckload and hoping that next season is going to be better than this one.” Baukol’s Barrels has a special right now for those interested in purchasing a barrel as a pre-order. Usually a barrel is sold for $95 each, but for the promotion it will be $85 each, or $80 a barrel if ordering multiple. Looking into ways to expand his business, Baukol is in the process of purchasing a laser engraver. “That would allow us to laser engrave onto the barrels, and this isn’t limited to barrel decor stuff. My goal is to have it here, up and running, and know how to use it before Christmas so I can start taking orders for custom work before Christmas.”

For those who are interested in doing their own DIY build, Baukol’s Barrels sells raw barrels, hoops, staves, and any part of the barrel people would need to custom build something on their own. Baukol explains that he wants to be a resource for those interested in doing their own building projects. Whenever a customer buys raw materials, Baukol likes to ask what they’re planning on doing with the items they buy. Sometimes the customers are hesitant to say because they are planning on building something that Baukol makes. Baukol’s response to them is this – “That’s awesome! Do you want some advice on doing some of this stuff? You can bypass some of the issues that I ran into when I first started out.” Baukol’s willingness to help DIYers goes a long way, and often people are surprised at his reaction. “People are pretty receptive to that, they don’t expect me to share that information.” 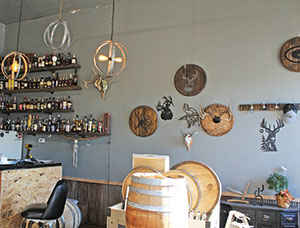 Although Baukol opened the Preston location about a year ago, for a large part of the year he was using the front as a storage unit. In the middle of winter Baukol didn’t want to go into a storage unit every time he needed a barrel, so the wall in his front room was three deep in barrels. Then Baukol’s wife came in and said, “You know, you have a storefront, you should really make it a storefront.” So about three months ago they came in and refinished the floors and his wife Meggy Baukol decorated the front and in the words of Austin Baukol, “She made itlook all presentable and pretty. I give her 100% credit.”

There is something in the store for nearly everyone, and choices that fit every budget. Maybe you don’t need a full barrel, but what about a wall hanging made from a whiskey stave? Candle votives for the table? Take a look at Baukol’s Barrels to find rustic decor that will make your home stand out and truly be one of a kind.