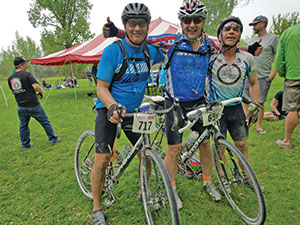 The SV 100 event organizers have more than bike racing in common. They have roots in Spring Valley, Minn.

They call themselves the “self-proclaimed tri-chairs,” which evolved because they didn’t want to see a great thing end when the last race director stepped down. They became chairs of the event by default, because somebody had to step up to keep this race going.

Paul Vogel has been a participant for seven consecutive years, making the trek from Ohio each year. In 2019, when The Almanzo 100 moved to Northfield, the three Spring Valley High School graduates decided to take the handlebars of this big event. The bike race, often touted as the granddaddy of all gravel centurions, was formed under the titled “Keep Gravel Weird,” with the help of organizer Drew Wilson.

In 2020, even with COVID restrictions and apprehensions, the 100 mile bike race didn’t give up. There were a total of 14 riders who commenced with the Spring Valley 100, coined the Quarantini in the year of the pandemic.

For Paul Vogel, he never considered becoming an event organizer. That wasn’t an aspiration.

In his first year as an organizer, he learned a lot. “I’m more aptly name player/coach and if the organizer portion interferes with my ability to ride in the event, I would step down. One of life’s lessons is to never turn your hobby into your job. It usually ends up ending your hobby. My bike hobby started in 2012 when my wife was diagnosed with a terminal illness. As a full-time caregiver, I sought out something to keep my mind fresh. I started restoring Cannondale’s 2002 NYC Firefighter Stars and Stripes edition bicycles. Then I learned of Almanzo 100 being run in my hometown. I was stationed in Cleveland, Ohio, in the United States Coast Guard at the time. I decided to join the adventure in 2015. I studied the gravel equipment for the time and built my first gravel specific bike from the frame up and rode in my first Almanzo 100,” shared Vogel.

Paul Vogel has since rescued approximately 20 frames and built more gravel bikes from the ground up, with 10 of them making it to the start line in 2021. “I give the bikes away, so far to friends and family with one ask, that they try the SV100 at least once, then no strings attached after that.”

On Saturday, June 5, 2021, the race started in downtown Spring Valley and ended in Willow Park in Spring Valley. “The only towns we actual race through are Historic downtown Forestville and Cherry Grove. We skirt the edges of Preston, Fountain, Carimona, Chatfield, Greenleafton and Wykoff,” explained Vogel.

There were 163 registered riders with 87 at the starting line this year. As Vogel offered, it’s a grassroots race and it has always been free. With that said, there’s a risk of losing riders at the last minute if conditions are not ideal. In previous years, the race attracted over 1,500 cyclists, this year the majority were from Minnesota, Iowa, Wisconsin, Illinois, and Missouri. Ages of participants ranged from 13 years old to 78 years of age.

This event has always been free. “Blood, sweat and tears…and lots of intestinal fortitude,” that’s the price you pay, according to Vogel. “We did not print shirts. The best keepsake that is the most cherished item is the race bib with your race number and race logo, which can only be obtained by registering and actually showing up to ride.”

“The golden rule of the race for the past 12 years is the race is self-supported where you are responsible for you, so there are no official, guaranteed hydration stations or checkpoints. The race is a test of mind, body and soul, and your ability to navigate the remote route through cue cards, instinct or GPS. This year, with the record heat, we broke the golden rule, for rider safety and coordinated five hydration stations at mile 21 (Chatfield), mile 40 (Preston/Greenleafton bridge), mile 67 (Forestville State Park), mile 76 (Cherry Grove), and mile 86 (Wykoff). Bottled water and bananas, compliments of Sunshine Foods in Spring Valley, sports drinks, dill pickles, Midwest caviar (aka pickle wraps), meat sticks (compliments of Valley Butchery and Ody’s Country Meats), and a variety of sweet and salty snacks to help reinvigorate the riders,” detailed Vogel.

“The physical and mental challenge, and the camaraderie of riders from all over the United States with a like passion for racing in the most epic 100 mile gravel adventure on two human powered wheels; there’s nothing like it,” encouraged Vogel. “Whether it’s the thrill and challenge of a 45 mph downhill on misshapen marbles or a half mile long 17% grade uphill on three inches of freshly laid gravel, the race is humbling and personally gratifying.”

According to Vogel, “This was the hottest weather day by far in my seven years of riding the route.  The heat, wind, and cloudless day certainly played a factor, as indicated by its impact on finishing times. For instance, typically, the top finishing time is in the 5 hours to 5:15 range. This year, the top time was an hour more than the previous years at 6 hours and 9 minutes. Riders spent extra time at the hydration stations and enjoying the shade, when they could find it on public property – to recharge their bodies and avoid falling victim to heat stroke or exhaustion.” The average biker drank approximately five gallons of fluid during the race.

With hot summer days becoming the norm, June 5 was a steamy 92 degrees with no cloud in the sky. But, that was no problem for Matt Boeshore of Nashville, Tenn. He was all smiles, because he’s orginally from Georgia and 92 is an average summer temperature for him.

“The business community really came to our rescue; when we put the word out last minute that we were going to stand up some hydration stations due to the record heat, they stepped up. That’s my hometown. Real good people with big hearts, and the donations of water, ice, sports drinks, fruit, snacks came pouring in,” expressed Vogel with gratitude.