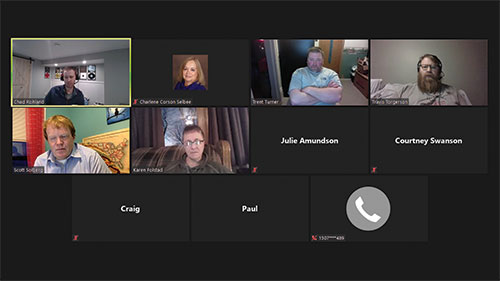 The city council unanimously agreed to reappoint Laurie Moen and Jan Solie to the city’s Library Board. Moen and Solie will each serve a three-year term, expiring January 1, 2024.

Spring Grove residents have taken advantage of the Fest Building being open last month  walking 91 times. The council felt that the recent arctic weather attributed to the increase in usage. None of the members of the city staff have heard of any problems. Amundson confirmed that walkers are using the sign-in sheet. The council agreed to keep the Fest Building open for another month.

The council approved keeping the Planning and Zoning committee at three residents and two council members. According to the ordinance, there are no term limits.

Torgerson motioned to make the proposed changes to the sidewalk and collections ordinances regarding cleaning the sidewalks, to eliminate confusion. Rohland seconded it. Motion approved.

Councilmembers Folstad and Rohland held a Zoom meeting with swimming pools co-directors earlier this year regarding 2021 fees, hours, lessons, and staffing. Also discussed was the necessary maintenance needing to be completed before the pool opens on June 7.

The council approved a motion to close the pool at 5 p.m. until July 4 to offer an extra hour of swimming lessons. At that time, the council will then reevaluate the hours.

The council approved a $2 swim on Sunday when attendance is light and an end-of-year school swim.

Police Chief Folz presented a synopsis of the department’s 2020 year-end report. With the addition of a third officer last year, Folz started his report by stating, “You are seeing us a lot more.” The department was able to answer all their calls and is working on their backlog.

At the beginning of the pandemic, officers immediately began wearing masks, and once they had access to personal protective equipment (PPE), it was safe for officers to have face-to-face contact.

The council asked the chief to update them on the department’s overtime. He responded that it did not get cut back because of the chief overtime hours. Officers used flex time if they had overtime hours.

The housing sub-committee is up and running, and the housing study is complete.

The lodging study is done, and EDA received a preliminary report at the end of last year, and the complete report earlier this year. EDA is in contact with a couple of hotel chains and are investigating different types of lodging facilities like Airbnb or studio apartments to meet the city’s visitor lodging needs. EDA is also looking into the status of the old motel to determine ownership and what can be done to get it up and running.

The Spring Grove Chamber of Commerce is up and running. The chamber has its own board and is active.

“Thank you for all your support that EDA has received from the city council,” expressed Swanson.

EDA committee members Solberg and Torgerson mentioned that a new coffee house is moving into the gallery and that they will be roasting beans onsite. Councilmember Turner shared that he was the first to ask in the state about regulations regarding coffee roasters.

Mayor Solberg started the Parks Committee report off with a positive statement, “The Parks Committee got a lot done last year.” Due to COVID-19, residents used the parks a lot last year. A lot of upgrades got done with the COVID-19 CARES grant money. The city will use $1,500 in grant money to plant native seeds in Roverud Park, which will get started as soon as the snow is gone.

Planning and Zoning committee member Torgerson shared with the council that he has spent time getting Turner up to speed on the committee’s activities.

Library Committee member Folstad announced that Dawn Johnson, librarian, is retiring. Her last day is July 30. The committee plans on posting the job sooner than later as Johnson would like the new librarian hired and on the job by June 1 so she can have a couple of months to train him or her. The library is installing sneeze guards to protect staff and patrons. The bingo program goes through March 6.

The council agreed with Fire Chief Turner that the committee should regroup and create a five-year plan regarding the future of the fire station.