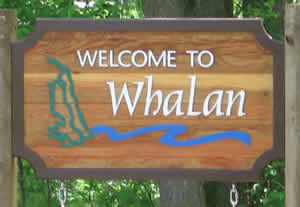 Where is Whalan, Minn., you might ask? If you travel south from Utica, and take a gravel road called Everyday Road you will run into a little village sporting a population of 63 people. Nestled into the bluff country between Peterson and Lanesboro, this little village offers the best pie money can buy, a bike trail and on the 4th of July, the best softball tournament in the world. This tradition started over 50 years ago. With a few interruptions from year to year, the tournament hosted it’s 46th tournament this past weekend. The tradition started with men’s fast pitch softball in the beginning. This writer was exposed to the Whalan experience some 35 years ago as a young player and I still attend the tournament each year as a coach and organizer. Fourth of July in Whalan is like Christmas in July. The tournament is hosted by the local Lutheran Church, and serves the best concessions stand you can imagine. Egg McWhalan sandwiches for breakfast, hot turkey sandwiches for lunch and brats with cheese and kraut for supper. Don’t forget the homemade cookies if you need a snack in between.

Since the decline in men’s fast pitch teams in the area, finding teams became a challenge, so organizers Everett “Thor” Johnson (Everett has been a part of every tournament hosted there) and Travis Lange decided to try girls teams instead. This decision has given the tournament a new look and a bright future. This past weekend, the three-day tournament hosted 17 teams in three different age brackets. The energy was electric!

Attending this tournament for me is like going back in time. You have the same beautiful field, the same crack of the bat when it hits the ball and the echo of the hills. You have the same great concession stand smell, and even the same announcers voice from over 30 years. Kathy Wade, a retired teacher from Winona, still calls the games with relief from some other loyal supporters.

This year, the Whalan crew joined forces with the local Gambler Softball Association to keep the tournament tradition alive. We hope this partnership gives the tournament the support it needs to survive and thrive for the next generation of players, even if they are much younger and cuter than the players who started playing over 50 years ago. This year’s winners were: 12U Winona Velocity, 14U Chatfield Fireballs, and 16/18U Gamblers from St. Charles.