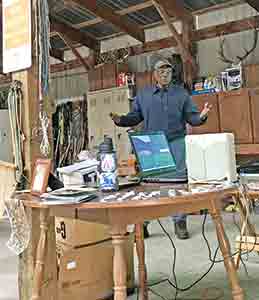 The Quail Forever group held an activity for Spring Grove High School students the afternoon of May 28. Unfortunately, due to a scheduling snafu, the students didn’t end up coming out to Dean Emmingson’s property for the afternoon.

Thurmond Tucker, Minnesota State Coordinator, and Eric Ressel, Farm Bill Wildlife Biologist and Certified Conservation Planner, had created an informative presentation about the bobwhite quail and its habitat; other members of the group had planned to work with groups of students in pulling the invasive garlic mustard plants and in “edge feathering” a wooded area by dropping some trees to provide cover for quail and other birds from predators.

Tucker and Ressel changed the format of the presentation to a discussion forum by the members present and continued with the afternoon. Currently the bobwhite quail habitat is only in Houston, Fillmore, and parts of Winona County in Minnesota. No other species has gone down in numbers as much as the quail.

Factors that contribute to the dip in quail numbers are cold weather, predators, and most influential, the  loss of habitat for nesting and brooding chicks. Farmers are clearing brush and farming right to the edges of woods. There is less and less brush and connective habitat; there are fewer fence lines. Housing developments have encroached farther and farther into habitat areas. In just the last ten years in the U.S., 53 million acres of wildlife habitat has been lost!

Insects that quail rely on for food have been disappearing due to the increased use of herbicides and pesticides; this causes a reduction in the number of birds in general. John Fuchsel, a member of Quail Forever, pointed out that insect-eating birds are relying more and more on backyard feeders.

Another member quipped, “At least they’ll have plenty of insects around this year with all the cicadas!”

Invasive plants such as garlic mustard, honeysuckle, and buckthorn choke out native grasses. Buckthorn, with a Latin name Rhamnus cathartica, causes birds who eat the berries to have diarrhea thus spreading the plants with the four seeds from each berry. Garlic mustard can actually be eaten in salads and soups by humans, but needs to be pulled by the roots and managed to control its spread.

Barberry bushes, which have previously been planted in suburban yards, have berries loaded with seeds and can take over the understory in a habitat. Barberry plants need to be pulled out by the roots, a tricky job since they are covered with thorns. The roots of a barberry emit a chemical that prevents native species from growing in the same location for four to five years. Woodtics winter in the barberry plants, making it even less desirable to have around.

Recently there has been an environmental movement in the suburbs with the creation of rain gardens and planting of native shrubs and grasses, but more needs to be done.

Some suggestions Quail Forever offers are to create housing for people in highrises to prevent suburbs from destroying the habitat.

Ressel added, “Farm the best and leave the rest!”

Burning the edges of woods and fields helps bring new, healthy prairie. The group shared that swatters and drip torches could be borrowed from the DNR and local fire departments sometimes help with controlled burns in order to train firemen.

Giant ragweed (Ambrosia trifida is the Latin name which means “food of the gods”) provides an excellent protein source; doves especially like it. Unfortunately, it also affects people with allergies, but according to a member it is worth a little sneezing! Pigweed and lambsquarters are other good seed sources.

According to Quail Forever member Dave Klinski, quail are an “umbrella species” — if you provide a habitat where quail can flourish, you benefit a lot of other species as well.

Such a habitat needs the edges softened by adding native shrubs, conifers, and brooding and nesting cover. A “covey headquarters” can be created in 35 to 50 square feet minimum, with all the essential elements of a quail habitat. Dusting sites are essential for the survival of quail; dusting helps maintain the optimal levels of oils on the birds. The habitat needs close proximity for all elements so birds do not have to travel too far. Food plots provide nourishment through the winter; relying on nearby crops such as corn fields doesn’t work once those crops are harvested. The group suggests a high diversity food plot with millet, peas, sorghums, etc., referring to it as a “blizzard buster.”

“Edge feathering” by dropping some trees from nearby woods provides instant cover for cardinals, dark-eyed juncos, quail and pheasant. Wild plums and cedars can then be planted amongst the trees to provide cover as well to provide protection from predators and raptors. It’s suggested to leave any vines on felled trees to increase the available cover. Native grasses which grow in bunches allow quail chicks to move around on bare ground and still have cover.

Fuchsel estimated that a home range for quail can be created using 20 acres. When asked how to get quail to show up in a new habitat, the group suggested connective corridors to other established habitats. If quail need to be brought in, it can be a lengthy process with several groups often being eliminated before they become established.

Brainstorming, the group discussed presenting to birding groups in the cities and Rochester, and asking to work together; emphasizing all the species helped by creating such a habitat; uniting efforts with Pheasants Forever; creating more awareness of the wild quail population in the area; and possibly connecting with groups in Iowa as well. It was noted that quail were included in an income tax write off for a few years, but then were eliminated from that funding source. Quail Forever partners with the Audubon Society; the goal is to bring back the quail population, and not necessarily to ever have the option of quail hunting in the state.

Quail Forever is focused on getting more attention to creating suitable habitat for the wild quail in the area and all the other wildlife under the umbrella of the quail. They have been tracking quail detections in the area and shared that the northwest corner of Fillmore County have been seeing and hearing more quail recently.

Going forward, Tucker pointed out the need to involve young people in the effort. Tucker has been working with area schools and will continue to do so to make that happen.

This group truly looks to have “Quail Forever” in our area!