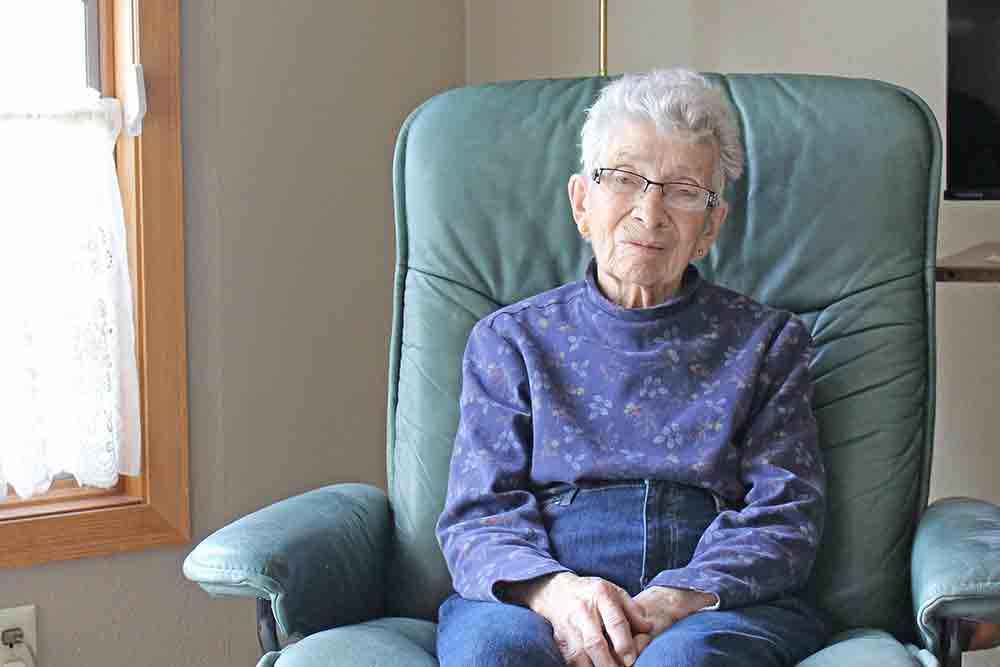 Not many people remember a time when trains ran through Preston, but for life-long Preston resident Ila Mae Olstad, those memories are near and dear to her heart. “My dad worked on the railroad. He was section foreman here in Preston,” Ila Mae explained. Her parents, Art and Melda Noel, moved to Preston around 1921 and she was born 10 years later. Ila Mae’s father had a year-round job working for the Dubuque Line of the railroad which ran through Preston, but in the summers, his job became mobile. “They would send him out with a large crew of men to work on the main line tracks,” Ila Mae said. Being the general foreman meant that he was able to bring his family along. Ila Mae’s sister Violet was 10 years older than her, so she doesn’t remember her being along for the trip very often. Her parents owned a trailer that they would bring along for the family to live in as the self-sufficient camp of several hundred men would move from place to place throughout the summer, but when the second world war started, it became difficult to obtain gas and tires for it. That didn’t stop Ila Mae and her mother from joining her father on his trips, though. They left the trailer at home and instead, stayed in his designated railcar with him which served as his office and home during the summer months. “In the front was his office and then we always had the back half of the car,” she said. “You got used to hearing the railroad noises.”

Ila Mae fondly remembers those trips, traveling with her parents to various places with the camp depending on where the railroad company wanted them. They spent time in Iowa, western Minnesota, Montana, the Dakotas, and more, always traveling by train. “We had a pass so we never had to pay,” Ila Mae said. “We knew how to travel on the train.” She remembered that her mother would always pack food for them so they never ate in the dining cars.

“It was an experience that not many had a chance to do,” Ila Mae said. The men who worked under her father were a diverse population of different nationalities and cultures, something a small-town girl like Ila Mae normally wouldn’t have been exposed to. “I think I learned how it felt to be different,” she said. “It taught me how to be more tolerant.” She also enjoyed being able to make new friends and getting to know a wide range of people in the towns they camped near.

Art Noel ran a tight ship at the camp, making sure that his men were respectful of local townspeople as they moved around and watching out for those who were drinking too much. “He was quick to remove them from the crews,” Ila Mae explained. “He was a good foreman. Anyone who worked for him usually came back.” Young men from Preston often came along for the summer as well, serving as foremen and taking care of administrative duties such as the book work. In fact, Violet ended up marrying one of those men, Russ Vischer, whose father was the Preston cop during Ila Mae’s growing up years.

Some of the towns out west that the Noel family visited on their trips were still fairly new and didn’t have all the amenities Ila Mae was used to such as sidewalks. That normally wasn’t a big deal, but one year, she received a new pair of roller skates and was excited to bring them along that summer. “We got to one of these towns and it didn’t have any sidewalk to skate on,” she said, remembering her disappointment.

Despite being gone for most of each summer, Ila Mae’s mother planted a garden at their home each spring which their neighbors would take care of while the family was gone. “We always had good neighbors,” Ila Mae commented. Their house was right next to train tracks in Preston near the depot, which led to some interesting challenges for the family. “Mom would wash clothes and if she had something on the line, we’d run out quick and get it in before the train came or it would be covered with soot,” she laughed. She remembers running to school to beat the train or else she would have to wait until it had passed before continuing her walk, which would make her late for school. “There were times I got to school and would have to wash away some soot.”

Ila Mae spent around 10 summers traveling with her parents for her dad’s job. The year she was a sophomore in high school was her last time which took them up to North Dakota. Then things changed. “We had a big flood that took out the track from Preston to Reno on the other side of Caledonia,” she said. “My dad’s job in Preston was in jeopardy.” He ended up taking a job with the railroad in La Crescent in 1948 and moving there with Melda. Ila Mae opted to stay in Preston, moving in with her older sister and her family so she could graduate from Preston High School, rather than transferring to La Crosse for her senior year. The fall after graduation, she married and continued to live in Preston, working as the school librarian for many years.

When Ila Mae’s father finally retired from the railroad after having worked for it since he was a young man, he and her mother moved back to Preston and built a house that she now lives in. She has enjoyed working with the Preston Historical Society on the railroad memorabilia at the trailhead such as the elevator, the caboose, the boxcar, and more, even donating an automobile and trailer car. “I want to remember my railroad heritage,” she explained. She was recently surprised to learn that she had been selected as the 2022 Trout Days Grand Marshal. “I said, there must be somebody else that has done more things for Preston,” she laughed. “It’s excited and I’m very honored. Preston has been very near and dear to me all my life.”

A lengthy article on Ila Mae and her growing years was recently published in “The Milwaukee Railroader” magazine. In addition, the Ila Mae Collection of 50 photos has been accepted and archieved in the permanent collection of the Milwaukee Road Historical Association library at the Illinois Railway Museum. You can find it online at www.irm.org/.