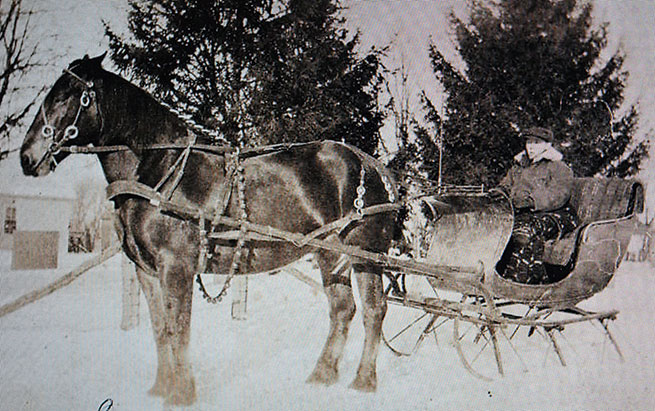 Winter has always presented its particular challenges in southeast Minnesota. The earliest white pioneers, who came from states farther east or who immigrated from northern Europe, could even shelter first beneath their wagons during warmer weather. But as winter approached, indoor shelter was a necessity. If there was not enough time to construct a log dwelling, recent arrivals might stay with earlier-arriving family or friends. Could have been crowded.

Once a farm had been established, winter care of the animals was also a concern. Back in Europe, it had often been challenging to obtain enough fuel to keep warm. That was not as much a problem in the frontier, forested areas of southeast Minnesota. Rivers, creeks and springs were available for water – unless those pioneer farmers resided on a ridge. Near Eitzen, there was a sufficient supply of wood for fuel, but the Mississippi River was nine miles away, and the nearest spring was four to five miles away in Winnebago Valley.

For household uses, a cistern would be built. But the ponds created to catch rainwater for the livestock, which worked well during warmer seasons, would freeze solid to the bottom in winter. C. Bunge, Sr. settled near Eitzen in 1862 and at some point, had a 300-foot-deep well drilled. Above was a 65-foot windmill tower, and 14-foot windmill wheel had enough power to lift water 300 feet.

Warren Lange wrote about his boyhood on South Ridge in the late 1920’s and early 1930s, when swirling snowstorms created white-outs and a real danger of becoming disoriented. That made going from building to building “precarious.” Binder twine provided the solution. “Tying an end of the twine to the building you were leaving and then paying it out as you went assured you that at least you could find your way back to where you had come from. It was not always possible to find an outbuilding without more than one attempt.”

With temperatures below zero and an uninsulated farmhouse, it was a seemingly a never-ending task for Warren and his brother James to accomplish their assigned chore of keeping the wood box full. Huge icicles would hang from the eaves and with no storm windows, ice on windowpanes could be a half-inch thick. Small snowbanks formed on the floor near the windows of their upstairs bedroom. “One thing we could be sure of was that we would not be asphyxiated in such a well-ventilated domicile.”

In that upstairs bedroom the two brothers slept between two feather ticks (large canvas-like bags filled with feathers, which were very comfortable – after they “warmed” them up. “Upon first climbing between those canvas covers, the absolute shock of cold was benumbing.” Warren’s solution was “toasted pajamas.” He would turn himself in front of the downstairs wood stove until he felt like he was almost burning. Then he would dash up the stairs and jump into bed and lay perfectly still. “Any movement just brought slashes of cold.”

Brother James would wait by the stove until Warren had the bed warm. More than one brotherly altercation ensued, sometimes to the extent that neither had a cover.

Warren also had fond memories of winter wonders, namely the aurora borealis (northern lights). “The pale blue and green lights would dance across the night sky. I recall ‘oohing and aahing’ over the spectacular displays.”

And sometimes when temperatures were double digits below zero, sunrises could produce “sun dogs.” A college professor would later explain that these vertical bright pillars on either side of the sun was just sunlight reflecting off ice crystals.

On a rural ridge, when winter drifts would render the road impassible, local folks would drive their horse-drawn sleighs in farm fields. Some farmers even put in gates to accommodate the winter detour. With considerable use, these substitute roads could pack solid enough to support an automobile. One spring thaw revealed that one snow route had run above a disk harrow that had been left in the field.

A nearby gravel road was cleared with a rotary plow. Driving on that road during late winter, there would be plowed snow above one’s head on either side of the road, which made it “like negotiating a walled ditch.”

Sources: “The Bunge Story” and published memoir of Warren Lange, “My Boyhood Years on the Farm.”