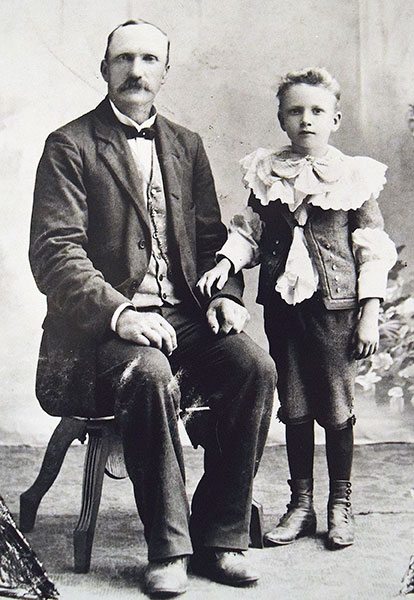 Part one of a two-part series

It has long been a double distinction – the name and the landmark – for the Houston County hamlet of Black Hammer. That early landmark, ”The Stone Lady,” still looks down from a hill named Black Hammer, 1.3 miles south of the village with the same name. Early 1850s settler Knud Olson Bergo lived near a bluff in Minnesota that reminded him of a hill shaped like a hammer back in his native Norway. One Minnesota morning, he arose to see the bluff’s charred appearance after a prairie fire and exclaimed, “svart hammer,” which in English is “black hammer.” After the first choice for a town name, Clinton, proved to be a Minnesota duplicate, the nickname for the bluff became the official name of the village and the township.

When pioneer farmers broke the sod on the top of this bluff, they dragged the sandstone rocks on a stone boat (a plank used as a sled, pulled by a horse) to the east side, where they were fashioned into a pile resembling human figures. Legends say there were at least two figures – either two ladies or one lady and one man. It has been said that there were enough rocks to build a child, too. Ninety-one-year-old Allan Morken recalls hearing his father Tilford (born 1907) talking about there being two or three stone figures. The “full bustle” design for a female skirt makes for sturdy construction by stacking. However, stacking for a masculine profile would have been more difficult and less likely to endure. The exact identity of her companion(s) is likely lost to time.

The lone surviving stone figure has elicited community attention and pride through parts of three centuries (1800s, 1900s, 2000s). The Stone Lady has hosted many human gatherings and parties, especially in the early 1900s. Morken said she was damaged once by some teenagers, who were later involved in rebuilding what they had disturbed. Originally built with just loose rocks, the lady has had cement applied to keep her intact a couple of times.

The cherished landmark has been a source of fascination and mystery. How many original stone figures were there? Why was she built? Who built it – and when?

Why? Although it took some work to painstakingly stack these rocks, maybe It could have been a diversion from the almost constant labor of taming a wilderness. Or maybe there was a shortage of materials for a creative mind otherwise stifled by a pioneer existence. However, in the summer of 1976, there was a visitor from Norway, 21-year-old Brit Staven, who was eager to visit the Stone Lady of Black Hammer. The Spring Grove newspaper reported her father’s farm in Norway having a similar stone lady that had been built long ago by summer herders in the mountains. Since most of the earliest Black Hammer settlers were immigrants from Norway, could some have brought with them knowledge of a stone lady from their homeland, which might have served as an inspiration for The Stone Lady of Black Hammer?

Who? It has been said that teenagers built The Stone Lady. But the consensus is that Valtin E. Valtinson built the treasured landmark. He may have had help; an unnamed nephew has been mentioned. Valtinson’s mother lived with him as a widow until her death in 1895. Two months and three weeks later, he rents out the farm (containing The Stone Lady) and moves away from Houston County – finally to the northern Minnesota city of Grand Rapids.

The next year (1896), he enjoyed an extended visit at his brother’s home in Warren, Marshall County, Minn. Then in 1897, he visits Black Hammer, accompanied by a young nephew from Warren. This is likely when a photo was taken with his young nephew. But the unnamed, young lad in the photo would have been far too young to have been the nephew stone-stacker for The Stone Lady some 20 or 25 years previous.

When? There has been some disagreement about the year and even the decade when the Stone Lady was built. Most accounts refer approximately to the 1870s. One specifies 1867. But another claims the early 1850s – before the first deeds were recorded. These who and when mysteries continue next week.

Lee Epps earned an undergraduate degree in history in 1967 before studying with a graduate fellowship in 1968.