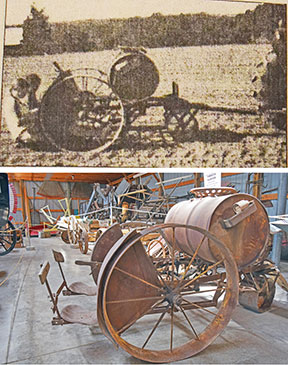 Minnesota is not often associated with tobacco farming – more likely, Virginia or Kentucky. But there were tobacco fields in Houston County. Local historian Georgia Rosendahl wrote about her tobacco experiences after her father Oscar Kroshus, one day in the mid-1940s, announced he was going to grow tobacco on the family farm just southwest of Spring Grove. “He had told the story many times to us of how his dad had grown tobacco, and it sounded quite easy. But looking back, it was far from easy.”

Tobacco growing was a labor-intensive operation, that consumed most of the year, according to the late Avis Gaustad Wojahn, the daughter of a long-time tobacco farmer in Sheldon Township. “The seeds are started inside in the spring and the final product is sold in about January. Tobacco seeds are about the size of a grain of sugar… We needed only about an ounce of tobacco seeds to plant the whole crop, which was two acres.”

Rosendahl remembers her childhood tobacco tasks after school in both the spring and the fall with more extensive summer duties. That first spring, her father built what he called a “hot bed,” which after the tiny seeds had been planted, would be covered entirely with cheesecloth which created a greenhouse effect. The seeds germinated and grew quickly, but needed to be thinned. “It took from six to eight weeks to produce plants large enough to transplant into the fields after the danger of frost was past.

“We had a tobacco planter which we pulled behind our small tractor. There was a wooden water barrel mounted on the top of the planter, and on the back, there were two low-mounted seats just barely off the ground. My mother sat on the left seat, and I would sit on the right while my father drove the tractor. The wheels of the planter were geared so that as they turned, it tripped some kind of mechanism that let down a squirt of water from the barrel (every 18 or 20 inches), and then it was up to my mother and myself, taking turns, to set the seedling at the moment the shovel opened up the furrow and the water was ejected. Then the dirt was dropped back into place and packed by the machine. After we got the hang of this job, it actually was rather fun.”

But the really hard work lay ahead.

By the 1940s, horses had been replaced by tractors. “Planting using the tractor was much easier than with horses,” concluded Wojahn, ”because you could get a nice steady speed. The horses would sometimes go slow and then fast, and then they would want to stop and leave some nice surprises for you to roll over.”

In the era before herbicides for weeds and insecticides for insects, the tobacco fields had weeds that had to be hoed and big green worms, which Rosendahl described as being “about three inches long and thick like a cigar with a big horn sticking out of one end. The value … declined if those big worms ate holes in the leaves, and so it became the job of myself and my brother to walk the rows… picking off those big worms and stomping on them.” Wojahn described a different method of worm removal. “They pop pretty good when you throw them on the ground just right.”

Another late-summer task was walking the field while ‘topping,” which was removing the top portion or flower of the plant so the leaves would broaden. But then, the plant grew suckers, which were other stalks that grew out of the main plant. And then walking the field entailed removing these suckers by hand as well as disposing of the big green worms. Suckering was backbreaking labor – repeatedly stooping and bending to remove the suckers from the top to the lower part of each plant.

“Hail was another big worry for a tobacco farmer,” added Rosendahl, “and I remember my dad taking out hail insurance – not a cheap commodity!

And then came the harvesting, which at various times resulted in Houston and Fillmore Counties being among the top tobacco-producing counties in Minnesota.