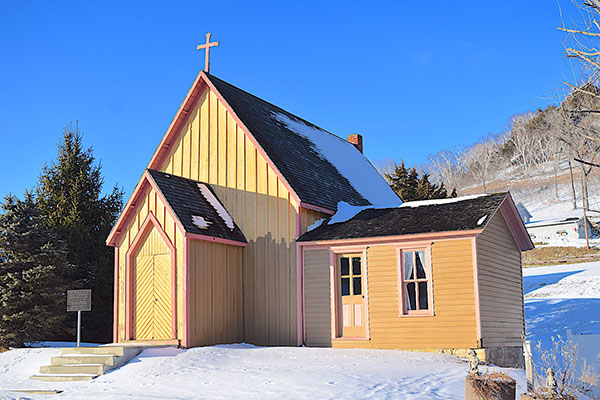 Part three of a series.

Two men had been observed around town making small purchases. One claimed he was working on a model for which he would soon be applying for a patent. In 1870, it was surely common to see non-residents in a town on the heavily-traveled Mississippi River. It was later learned these two men had been staying in a log cabin not far from town – again not unusual, log cabins were common in 1870. Brownsville, which had the first post office in Houston County, had a population of about 1,500 with approximately 40 stores, four churches, a printing office, several manufacturing establishments, warehouses, a theatre, boat yards on the Mississippi River and “other accessories to a thriving town,” according to an 1882 history of Houston County.

That bound volume included a detailed account of an attempt on September 10, 1870, to rob the safe at Sprague Brothers and Co. in Brownsville. One of the proprietors, D. G. Sprague, resided in the hotel across the street but was his own night watchman, making his bed each night on a counter in the store. This night, “he found himself on his feet with two men making a vigorous assault upon him, which, realizing the situation, he resisted the best he could and succeeded in tearing away from his assailants. Reaching the door, he unlocked and opened it, when he was seized by the collar of his shirt, but he broke away or rather tore himself out of the only garment he had on, except his stockings, and ran across the street to the hotel where he boarded. Not succeeding in effecting an entrance, he headed for his uncle’s. A. D. Sprague, shouting as he ran.

“As he passed the house of Wm. D. Giles, who, it seems, had not yet retired, as he had seen a suspicious man around late in the evening. Mr. Giles rushed out with his gun and fired into the air, which accelerated young Sprague’s movements as well as the departure of the ruffians.”

He would make it safely inside the home of his uncle, who at first did not recognize him in his disheveled and bloody condition. He had five severe scalp wounds, the scars of which he would forever carry “as mementoes of the murderous fray.”

It was discovered that the thieves had entered through the adjoining hardware store by “applying nippers to the key left in the front door” and then using a side door to enter Sprague Brothers. A lighted lantern was found along with a club and a hat. On the counter in the hardware store, a two-ounce vial of chloroform and oil for lubricating (drill) bits were found. In the morning, a kit of tools was found near the steps, which included two jimmies, seven skeleton keys, five small wedges, a brace and two drills.

Apparently, the bandits had a stolen horse and buggy waiting down the street as an escape vehicle. They did abscond quickly and drove to La Crescent where they abandoned the horse and buggy before crossing the river. Despite being pursued by several search parties, they were seen only by coon hunters who were unaware of the crime. They were never captured.

Also in 1870, a gang of robbers had more financial success in Hokah at the Valley House, where they “went through one night, from cellar to garret, and obtained $98 in money. That had the same purchasing power as $2,000 would in 2022. The same night, they were at the Barnes House in Caledonia, “procuring $30 (worth about $640 in 2022) from Mr. Barnes’ vest and also going through the boarders.” They also struck the DeSoto House. At the Reves’ residence, Mrs. Reves heard the intruders and pulled her husband’s pants into the bed and thus kept their cash from being stolen. The house of James Smith was also entered, but “nothing of value was taken.”

This 1882 history of Houston County included a year-by-year collection of “interesting events,” reflecting life in the county during its first three decades. The two entries for the year 1870 provided the information for this column. Newsworthy events from the years 1853 through 1868 were covered in columns previously published on November 29 and December 6, 2021.