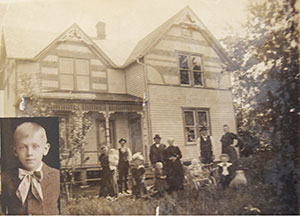 Part three of a series

Vagrants, often known as tramps, passed through southeastern Minnesota in the later decades of the 1800s and the early decades of the 1900s. Even those that were seemingly well-bred and educated to some extent, preferred to seek charity more often than to seek employment. There were more than a few tramps that traversed the highway near Eitzen and Portland Prairie, recounted Ray Fruechte from his boyhood years in the early 1920s. “They’d stop in and ask for a handout.”

However, the life-long area resident had more enduring memories of the more industrious peddlers on the road. One “old fellow” came from La Crosse more than once, probably having gotten a ride with someone from Caledonia before walking to Portland Prairie, concluded Fruechte. After coming inside, he opened the pack on his back and displayed scarves, sweaters, tablecloths and other similar items. “I liked to watch that fellow,” who would declare a piece of material “only linen, no cotton.”

With a scarcity of hotels or roadside diners in most rural areas, these traveling salesmen depended on hospitality, but not always handouts. One time, having arrived at midday, that same “old fellow” asked if he could eat the noon meal with the Fruechte family. After the repast, the peddler asked Ray’s mom, “Now, how much do you want for the meal?” His mother thought a quarter would suffice. “Oh, you charged me too much,” the peddler replied. Thereafter, whenever the kids saw the old fellow, they would say, “There comes old ‘charged me too much.’”

Another “old fellow” came in the evening and asked if he could stay overnight, and he was allowed to use a spare room. In the morning, he asked Ray’s father if he had a saw that needed sharpening. His father produced one he called “pretty dull.” The peddler had “a vice that he fastened to the seat of the chair, and he got out his file and filed that saw. My dad said that saw never cut as good as it did after that fellow sharpened it. Dad asked him if he wanted pay for sharpening the saw, and he said, ‘No, I try to earn my way a little bit anyhow.’

Then there was Abraham, who came around with a horse and buggy carrying an assortment of items for sale, one of which was “Samaritan Oil” touted to be a healing oil. “I know that he would like to have you believe that it was the kind of oil that a ‘good Samaritan’ used on the man that had fallen among the thieves on the road from Jerusalem to Jericho. I guess it was pretty good stuff, because when we got a cut on our finger or had some other kind of wound, we would bandage it and soak the bandages with ‘Samaritan Oil,’ and it seemed to do the trick all right.”

And then there were the gypsies – men, women and children – who traveled in caravans through the United States as early as the 1800s. With ancestors from northern India, these nomadic people had immigrated to North and South America, mostly from eastern Europe.

In Houston County, gypsies engendered both fascination and fear. “There were a lot of gypsies coming through the territory too,” noted Fruechte, “and they had wagon trains. At one point, I remember an awful long wagon train. I thought it was about a half-mile long. It looked like big, black boxes on the wagons. It had the top, back and sides covered. Only the front end was open.

“So I was out under the old pine tree looking at the wagon train going by, and all of a sudden, two gypsy women jumped out of one of the wagons and started running down the driveway. My sister Frances was in the house, and she thought they were going to kidnap me. So she came out and grabbed me by the arm and pulled me into the house. But… they didn’t want me after all. All they wanted was a little milk and bread. They said they had a lady in the wagon train that just had a baby, and she really needed that milk.”

This is the third column based on previously published recollections of then 89-year-old Ray Fruechte (1911-2003).