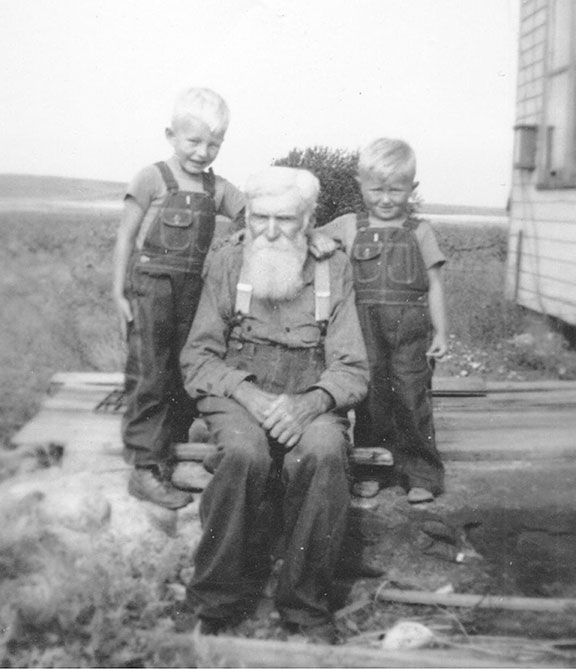 With an emphasis on function, bib overalls were the everyday fashion on the farm for men and boys during the mid-20th century (1900s). Nine or more pockets were available for whatever basic tools might be needed at a moment’s notice. That attire allowed a farmer to be a “walking tool bench,” concluded David Beckman, recalling his youth on a Houston County farm.

The bib would typically have three pockets. “The narrow middle pocket was for keeping a carpenter’s pencil when building something,” wrote Beckman. “Just about every farmer would keep his pocket watch in one of those pockets with the watch chain attacked to the button hole above the right pocket.” If it was necessary to carry a billfold, one of those bib pockets was preferable, especially with the snap securely fastened for an extra ounce of security.

Smoking materials often filled a pocket with either a tobacco pouch and cigarette papers, or maybe one of the deep hip pockets would contain a small can of chewing tobacco. The traditional red or blue handkerchief could be pulled from one of the two large rear pockets.  Often, the other back pocket would contain a pair of yellow canvas gloves. Some overalls had a loop on the back between the two pockets where a tool, such as a crescent wrench might be hanging.

Carpentry required a hammer, which was often hanging from a loop on the left leg. When wooden fence stakes were used, the farmer would pound in staples to affix barbed wire onto the stakes.

There had to be a pocket, usually on the right leg, for pliers and a screwdriver. Pliers could “tighten loose things, loosen tight things” and get a good grip on things. But their versatility was essential for fencing, with sufficient leverage not only to bend but also to cut barbed wire.  Pliers could also stand in for a hammer if need be. A plier pocket might have on the outside a smaller pocket for a pocket knife. But because a folded knife could easily fall out, pocket knives were more secure in one of the deep hip pockets, which were large enough for a supply of nails or staples.

Most of the pocket knives I remember,” said Beckman, had just two blades which were not very large, unlike the Swiss Army knives of today which are a walking hardware store. Farmers’ knives were used for cutting things, carving things, scraping things, making a hole in things and in dire circumstances, the backside of the blade was used as a screwdriver.”

Overalls were made from heavy denim cloth that was effective in protecting a farmer’s legs. The material could not easily be punctured or cut and would not easily tear. Because overalls were loose-fitting attire, they were not only comfortable but surprising cool on hot summer days. “Straps over both shoulders supported the weight of whatever things were carried in those pockets,” added Beckman.

Beckman’s dad always kept a fairly new pair of overalls, “not yet faded and stained,” for special occasions, such as trips to town, farm auctions or visits with family or friends. He could dress up a little more by wearing a white dress shirt underneath the bib and a tie “fashionably bulging over the bib. Believe it or not, he looked pretty spiffy!”

Bib overalls were also the common clothing for all farm boys during their early years. Knee patches were also common for the youngest lads, who while crawling on their hands and knees, challenged the hearty material far more than did the menfolk.

Looking ahead to attending high school in town along with town kids, young Beckman feared being labeled a “country bumpkin” if he had to wear overalls to high school. But his mother was “much too savvy” to let that happen. He and his brother began wearing jeans to school in the fifth or sixth grade.