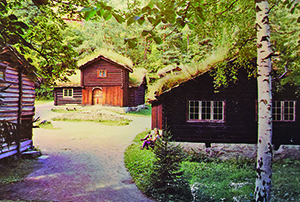 Many residents of Houston County in 2021 are descended from settlers who arrived in the middle-to-late 19th century (1800s). Annual Syttende Mai (Norwegian Independence Day) celebrations in Spring Grove honor the area’s Norwegian heritage. There are approximately four and half million Norwegian Americans, the 10th largest European ancestry group in the United States. Most live in the Upper Midwest, most of all – more than 868,000 in Minnesota. About one-third (33%) of residents in both Houston County and Winneshiek County, Iowa, claim Norwegian heritage, even more in Fillmore County (39%), fewer in Allamakee County, Iowa (20%).

The first organized emigration from Norway in 1825 came for religious reasons during a period of religious turmoil. But most would come in the last half of the 1800s for economic motives – impoverished by agricultural disasters that left Norway unable to support a growing population. It was the same in much of Europe where political repression and religious persecution were also factors.

Almost three million European immigrants, including over 20,000 from Norway, braved the sea voyage to North America between 1844 and 1854. It was not a pleasure cruise. Accommodations in steerage were so filthy that on some immigrant ships 10% of the passengers died, mainly from disease.

Glowing reports of opportunity in America were enticing, but leaving Norway was likely a lifelong proposition and not easily accomplished. Most were impoverished but had to raise the funds for the overseas journey. Many sold what they had and perhaps also borrowed money. The fare from Norway averaged about $33 per person (equivalent to $1,000 in 2021 money). They had to provide their own bedding, cooking utensils and other implements. Extremely problematic was preparing enough food to sustain them for the approximate three months voyage – a requirement before boarding the ship. With spoilage in mind, there were quarters of dried beef, dried leg of lamb, salted pork, kegs of herring, cheese, butter, potatoes, dried peas, flatbread, lefse, rye flour, syrup, sugar and coffee. Among items packed in wooden chests included a Bible, hymn book and book of sermons.

Depending on the wind a vessel might encounter, the voyage might take anywhere from six weeks to more than four months. Once arriving in North America, there was often a long, arduous journey west. Illinois was the first mid-west Norwegian hub that spread first to Wisconsin before the Civil War. Treaties with Indians opened Minnesota and Iowa Territories for settlement. There were often stopovers in Illinois or Wisconsin until suitable land could be acquired west of the Mississippi River. In 1850, a dozen Norwegian families from Dane County, Wisc., relocated in Winneshiek County, Iowa. In 1852, Spring Grove became the first Norwegian settlement in Minnesota

In 1841, the Distribution-Pre-emption Act permitted any head of family or single male adult to pre-emptively “squat on” 160 acres of government land and then pay the minimum price for it – $1.25 per acre – before the land was offered for sale to the general public. Settlers were guaranteed that if they occupied land prior to purchase, they would no longer be regarded as trespassers.

It was not just European immigrants that took advantage of land available in the upper mid-west. Due to debt during the world-wide depression of the early 1840s, tens of thousands of farm families in the Ohio Valley and areas bordering Lake Erie and Lake Michigan sold their cultivated homesteads to newcomers and went west to start anew on the frontier, which included Minnesota Territory. Iowa became a state in 1846, Wisconsin in 1848 and Minnesota in 1858.

Some information came from the Wilmington Lutheran Church 100th anniversary booklet, published in 1955.